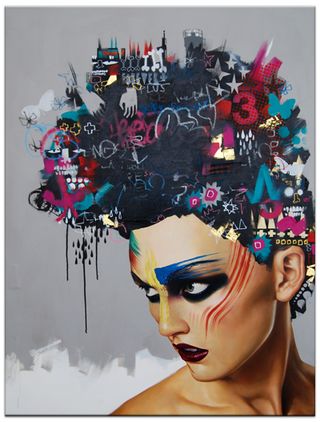 Heralded as a new star in the art world, the artist – whose familiar skeletal, giant toothed street art works with painting partner, Sweet Toof, Lucas Price's work can be seen in high profile spots all over the capital, and the world.

Doze Green was born and raised in the upper west side of Manhattan, New York City and was one of the pioneers of the Hip-Hop culture. He first started writing graffiti in his neighborhood in 1974, and started painting subway trains in 1976. The following year he joined the Rock Steady Crew. The Rock Steady Crew were pioneers of a new style of dance known as breakdancing or B-Boying. The crew first started dancing at art exhibitions and galleries of Soho and the Lower East Side of Manhattan.

During this time Doze Green was also attending the High School of Art and Design, where some of the most talented and well-respected graffiti artists came from. Artists such as Lady Pink, Daze, Ernie Valdez, Seen TC5, , , Mr. Wiggles, Mare 139, and numerous others. In 1982 Doze Green showed his artwork in a well-known group show at the Fun Gallery. At this same time after appearances in major movies such as Flashdance, Style Wars, and Wildstyle, the Rock Steady Crew was launched into action and the limelight.

From B-boy to graffiti legend, Doze Green has gone to tagging the hallways of South Bronx projects to designing for clothing lines like Kikwear and Ecko. In the process, he's become a proponent of the avant-garde "fusionistic" art movement. Best known for his characters, Doze Green has begun to concentrate on canvases that blend wildstyle techniques with metaphysical concepts. Doze Green is also known for his live painting performances. Doze Green’s work is in many public and private collections throughout the United States, Japan, Europe, and Australia. His works have been published in BlackBook, Anthem, Juxtapoz, Tokion, and Vibe and reviewed on CNN.

Eric Felisbret is a former graffiti artist and acknowledged authority on New York City graffiti. Along with his brother Luke, he created www.at149st.com, a comprehensive online documentation of New York City graffiti. Eric Felisbret is a graffiti artist and historian, widely admired for his traditional style and vast knowledge. Active in the graffiti gallery scene, his paintings have been featured in Spraycan Art and Aerosol Kingdom: Subway Painters of New York City. 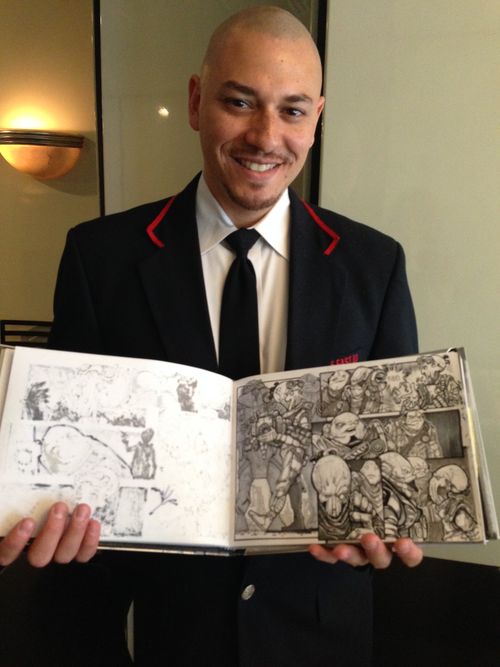 NEW YORK CITY based ILLUSTRATOR, Charles Brian Ugas also known to his friends and followers as 'oOge',  has been going through boxes of Staedlter and Micron drawing pens and markers for over 30 years now. Brooklyn born and raised by a single mother on the border of Ridgewood and Bushwick, oOge was heavily inspired by CINEMA.

oOge hopes to see his work make the transition to the big screen some day. As he would say,  "To see, actual actors portray my characters on the silver screen would be my ultimate dream come true. I feel it in my heart that I'm ON MY WAY...." Who says it can't happen?

Ugas' current projects include a graphic novel that could expand into a trilogy. His work is political, edgy and very sharp. I would like to request more large scale paintings from "Ooge".

Randy Gilson is a Pittsburgh based artist who is committed to adding a touch of art to some of his city's most devasted areas and neighborhoods. Randy is both an artist and an activist whose street art efforts are nothing short of beautiful and amazing. Here is a video of his process:

Os Gêmeos (Portuguese for The Twins) are graffiti artist identical twin brothers (born 1974) from Sao Paulo, Brazil, whose real names are Otavio and Gustavo Pandolfo. They started painting graffiti in 1987 and gradually became a main influence in the local scene, helping to define Brazil's own style. Their work often features yellow-skinned characters - taken from the yellow tinge both of the twins have in their dreams - but is otherwise diverse and ranges from tags to complicated murals. Subjects range from family portraits to commentary on São Paulo's social and political circumstances, as well as Brazilian folklore. Their graffiti style was influenced by both traditional hip hop style and the Brazilian pixaco movement.

The twins work is extraordinary - often covering huge walls or sides of buildings. Now their art is being honored in a new updated book on World Graffiti called, appropriately, Graffiti World. The book contains street art from more than 150 street artists from around the world.

I am drawn to the art of Xavier Prou whose large Rats adorn many NYC building walls recently. He had a recent show at The Jonathan LeVine Gallery on 20th Street in the Chelsea Gallery District of NYC.

His work is very distinctive and powerful. View his art at LeVine ... or on the street!