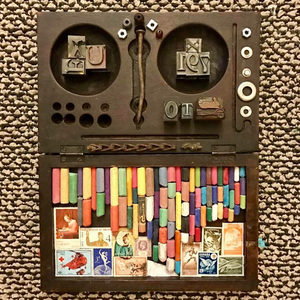 "My work rises to the surface of my mind from deep within my sub-conscious.  It is intuitive and rather compulsive.  It is an attempt to make sense of the chaos that I experience in my mind and the world. Art allows me to explore what often feels frightening and overwhelming in a way that makes it visible, but also safe.  Transforming it into something tangible.  My artwork simultaneously expresses joy and angt; two states of being that I hold simultaneously.  Much of my work explores this dichotomy: chaos vs order, spontenaouty vs precision.  Trying to make order out of chaos."

Creating intensely personal, vivid artworks from assemblages to abstract paintings, mixed media work, to sculptures, artist Kate Carvellas finds great beauty in the every day. Whether she’s creating mixed media work that springs up form her subconscious or working with found objects to shape assemblages that turn discarded materials into something that vibrates with new life, she’s moved to make the simple profound.

With bright-hued abstract paintings both delicate and bold and sculptural works that seem pulled from a rich inner-world, Carvellas says her work is “an essential and intensely personal part of my life.  It explores and expresses the inner workings of my mind and heart in a way that words cannot.” It is the artist’s hope that those viewing her work will find it resonates on an intellectual, emotional, or spiritual level.

In 2004 Kate began creating two-dimensional thematic montages using imagery from various magazines and clip art sources. With further exploration she began to pursue a different direction, creating, original, three dimensional collages.  In 2007 she began exploring the creative world of mixed media and assemblage and fell in love with both of these media.

12 years ago her work was made entirely of borrowed images and objects.  Through the years, she slowly began leaving her own marks on the work.  Starting out with light pencil markings to more visible lines and shapes.  As her confidence grew, so did the strength of her marks and brush strokes.  While she is still deeply enjoying creating assemblages out of found objects, shes now creates abstract paintings made entirely from her own hand.  These painting, at first, sprang straight from her subconscious.  She has also been using her own photographs as the springboard for her abstract paintings.  Abstracting reality.

Her newest work has, in a sense, brought her full-circle.  She is now creating abstract works that combine painting, found objects and whatever else she finds that will fullfill her vision for the work.  She is thrilled about this new direction. 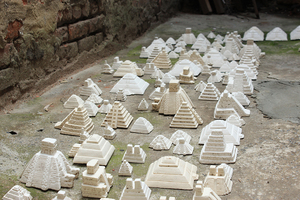 Born in São Paulo, Brazil, Liene Bosquê (1980) is a visual artist based in New York City. In 2013 she was a resident artist at Workspace Lower Manhattan Cultural Council (LMCC), having received the Manhattan Community Arts Fund. Bosquê has attended the New York Foundation for the Arts Mentoring Program for Immigrant Artists, in addition to participating in the 2012 Lower East Side Studio Program and being granted a place at the 2011 New York Art Residency and Studios (NARS) Foundation.

"I am interested in the relationship between place and people. My work deals with the exploration of sensorial experience within architectural, urban and personal spaces. By the process of creating traces, shadows, impressions, imprints, and reflections, I emphasize context, memory, and history. My multidisciplinary practice, including installations, objects and site-specifics, finds ways to fragment habitual spaces, transforming rigid, subtle architectures into more fragile and pliable materials. I'm interested in materials that hold a memory and also already saturated with meaning. I investigate the passage of time, which changes place and how we look at place, through the presence and absence of who inhabit these places," she says.

Bosquê holds a MFA from the School of the Art Institute of Chicago (2011), a BFA from the São Paulo Estate University (2003), and a BA in Architecture and Urbanism from the Mackenzie University (2004), also in São Paulo, Brazil. While living in Lisbon, Portugal, she was the recipient of the 2007 "Anteciparte" Award, having completed, in 2008, the Advanced Course at Centro de Arte e Comunicação Visual (Ar.Co.). 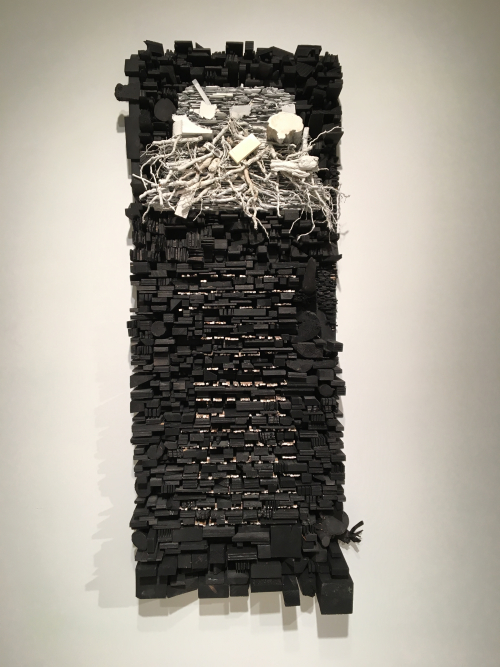 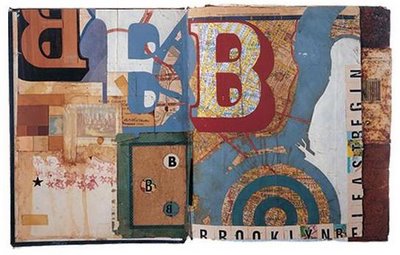 MAC PREMO is an artist who is immersed in the ongoing exploration into Systems Theory. That is, the interdependence of systems in nature, society and science. In the first two parts of an ongoing series aptly titled Understanding Everything, Premo looks to the innate human impulse to order and understand the world through the organization of systems. The myriad ways in which these distinct vocabularies interrelate, be they systems of physical (e.g. mathematics, science, etc.) or emotional data (e.g. memory, morality, etc.), is the primary subject of his meticulously crafted objects of wood, found objects and collage encased in poured resin.

Premo’s work also explores the cyclical nature of systems in works that reference not only the physical process of art making, but also the transport and presentation of art. The exhibition includes a short animated film work in which the artist’s distinct style is expressed in a dynamic sequence of collage-like imagery. Mac Premo has been exhibiting his work since 1999, most recently at the Brooklyn Academy of Music and PS1 MOMA in Queens.

Bryan Cunningham a.k.a MUTIE is a Detroit / Chicago based artist, whose work has received both National attention and Congressional recognition. His raw images have appeared on album covers, Juxtapoz magazine (where you can also see many Robert Williams works) murals and in galleries accross the country.

Self taught in wood working, painting, silk screening and welding, Bryan combines his talents into edgy Mixed Media assemblages. Drawing on influnences such as religions, comics, pop culture and nature. " I'm always working on something, sometime's multiple idea's at once, going days without sleep. When the inspiration hits me I can't think about anything else, I create untill I'm satisfied."

I like his edginess and new age tongue-in-cheek subjects.