Who knew New Jersey Has A Place Like Red Bank to Offer?
New Haven: The Birthplace of American Pizza and the Hamburger 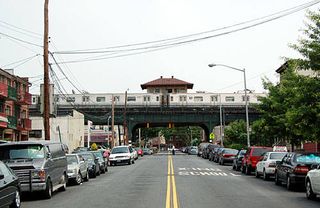 If you're an obsessive foody, or you just like food, Astoria is probably best place in the country for that.  Astoria is one of the most interesting neighborhoods in New York City.  It's even hard to believe that you are in NYC as soon as you set foot in this place.  Astoria is primarily Greek.  It has the largest Greek population in the U.S. outside of Greece. However, there are handfuls of italian and other immigrants that are settling here.

Astoria is accesible from the N,Q and the neighborhood is served by the stations Broadway all the way up to Ditmars blvd.  You can also take the M,R trains to Steinway St if you want to start exploring Astoria from there.  As soon as you arrive in Astoria, you will think you are either in Greece or somewhere in the Middle East, literally! You will right away notice the sights and smells of all the different cultures and foods that Astoria has to offer.

The streets with the most action in Astoria are Broadway, 30th Avenue, and Steinway Street.  The best time to go to Astoria is on a warm weekend night (also could be a friday) when everybody is out and about.  You can see men sitting outside in multiple groups playing backgammon and smoking Hookah pipes in the Little Egypt section on Steinway Street, which mainly extends from Astoria blvd to 28th Avenue.

30th Avenue and Broadway have may restaurants from almost every cuisine you can think of.  They have many ethnic markets as well including a produce market and a meat market.  The meat market is right off the 30th Avenue stop and displays lamb's heads in the window as well many many other different cuts of meat.

I noticed a pretty cool hobby shop.  It happens to have several antique models from years back and they also have many new models.  The man working there is a pretty nice guy and would able to help with your hobby needs.  This place is called Rudy's Hobby and Art.  I strongly urge you to check this place out.  It's very interesting.

One of my favorite markets ever is here in Astoria and is called Titan FOODS located right under the subway tracks at 2556 31st Street.  They have every Greek specialty that you can think of and each product is at its highest quality, but my all time favorite part of the market is the OLIVE counter.   There are over 20 different types of olives and I swear to god, these, and I'm not just saying this, but these are the best f**king olives in the world!!! Okay well maybe outside of Greece.  But as soon as you put one of their several olives in your mouth, your taste buds will take you to heaven.  I'm dead serious! It's totally worth coming out to Astoria just to get those olives.  There is also a great feta cheese counter with many different types.  In my opinion, they have the best feta you will get outside of Greece.  Here's the deal.  Titan Foods has the highest quality goods from Greece you will ever get in the country period.

This next place is the best Greek bakery you will ever go to outside of Greece; with all the authentic Greek baked goods including spinach and cheese pies and my personal favorite, the Baklava! Artopolis Bakery is in the back of a small strip mall on 31st Street.  Everything in this bakery is made from scratch either with local ingredients or imports from Greece. I've been to many middle eastern and Greek restaurants before, but their Baklava doesn't even compare to what this Baklava is all about!

To find out more about Artopolis Bakery, check out the interview with Regina, the owner of Artopolis.