New Haven: The Birthplace of American Pizza and the Hamburger 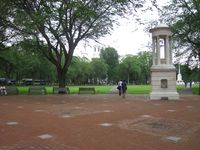 New Haven is known for Yale University, but it is also known to have the landmarks of some of the best food in the country.  Particularly pizza and hamburgers.  As you read through this, you will find out more about these little restaurants and their artisianal products as well as their generations of history, since some of these places have been around for 70 years!

Though less comfortable and slower than Amtrak, Metro North is the way to go because it's much cheaper.  The trip from NYC to New Haven takes roughly 2 hours. Some trains are nonstop and some require a transfer in Stamford, CT.  You should try to get a Metro North train that goes to New Haven-State St as opposed to New Haven Union Station.  State St station is right in the center of town and is walking distance to everything around Yale.  There are all several bus connections at State St as well.  At Union Station, you would have to take a bus or a taxi to get over to the main drag, which is mainly around the Yale campus.

Parts of New Haven are not that safe, but the area mainly surrounding the Yale campus has been revitalized over the years with many trendy shops and restaurants. So there is plenty to do to keep you occupied before or after a campus tour or in betwen classes or whatever. 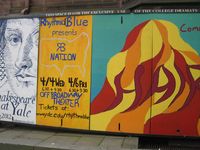 One of the many places that turned me on was of course, a record store.  Not only did they sell records, but they also sold cheap nic nacs as well as incense.  So it's a pretty interesting store that has been around for 64 years. 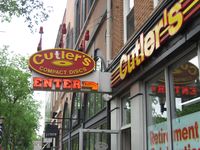 It's called Cutler's Records and Tapes located at 27 Broadway.  Unfortuately, this store is supposed to close on June 30, 2012 so go there before then.  If you don't make it, no worries! There are plenty of other things to do in this city.

Now for the moment you guys have all been waiting for... THE FOOD! The food in New Haven is some of the best in New England and even the country.

The best restaurants in New Haven are actually the oldest restaurants in New Haven and in the country.  First let's talk pizza.  New Haven-style pizza is a little different than regular American pizza.  A plain pizza from your typical pizza joint would just have tomato sauce and mozzarella whereas a New Haven-style plain pizza would have tomato sauce, oregano, and a little bit of pecorino romano sprinkled on top.  New Haven-style pizza is also referred to as "apizza," which was derived from the Neapolitan dialect.  The Italian-American enclaves of southern Connecticut pronounce it, "ah-beetz."

There are three famous pizzerias in New Haven which are said to have some of the best pizza in the country.  They are Frank Pepe Pizzeria Napoletana, Modern Apizza, and my favorite, Sally's Apizza.  Pepe's (as the locals call it) and Sally's are both located on Wooster Street a few blocks apart form each other.

Modern is located at 874 State St and is nowhere near the other two.  Every evening, hundreds of people gather outside these restaurants.  Pepe's and Modern are open for lunch and dinner and Sally's is only open for dinner, but they still get plenty of business, and with those lines outside, you can be waiting for a minimum of 2 hours to get a table on any day, even on a Sunday.  In my opinion, Sally's is the best of the three.

You know why? because everything that is put into that pizza is beautiful.  The dough is spongy and chewy, it's not overly cheesy (that's how I like my pizza), the tomato sauce actually tastes like real tomatos, I mean every single act that can go into making the perfect pizza pie is implemented into something divine.  You can tell as soon as you walk into this place that they care more about the pizza than the upkeep of the restaurant.  Seems like they haven't replaced anything since 1932 when they openned. 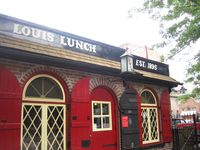 On to burgers: This place sells burgers that are different than any other burgers you had in your life.  They are also cooked in a very unique way.  This is the famous Louis' Lunch at 263 Crown Street.  It happens to be the birthplace of the Hamburger Sandwich.  They've been in business since 1895 and the store has not changed their decor since then.  The burgers are very similar to a piece of high quality steak.  When you bite into one, it actually tastes like steak.  They are not served on a typical hamburger bun.  They are served between two slices of white toast! And don't even think about asking them for ketchup! The only toppings they offer are cheese spread, one tomato slice, and one onion slice.

They don't want any other toppings but those because any more toppings will affect the unique taste of the meat itself. They don't cook the burgers on a grill, they cook them vertically in cast-iron grills that date back to 1898.  And that method of cooking gives the burgers a unique and delicious flavor.

Well, after reading this blog, you must have gotton a great taste of New Haven already, but... I would really suggest that you'd go for yourself because they really got the food concept down if you know what I mean.  There's a lot of great stuff in this town, Yale included, but the food is really something special.