Candy, Pickles, Donuts and More Down in the Lower East Side

A few blocks east of the trendy neighborhood of soho lies a place with loads of history and culture and plenty of cheap eats.  It's a neighborhood that is quickly becoming gentrified and more and more people are starting to live there.  In this blog, I am going to talk about three places out of several others that are well known on the Lower East Side.

To get to the Lower East Side, you have several options.  The general area is served by the NYC Subway F,J,M and Z trains.  So you will have no trouble getting over here especially from Midtown Manhattan. If you guys love candy, well this place is for you.  Economy Candy located at 108 Rivington St is by far the best candy store in NYC.  It's way better than the touristy Dylan's Candy Bar uptown.  Even though Dylan's is big and has a nice selection, Economy Candy is just more edgy and older.  Anyway back to Economy Candy.  Since 1937, this place has been selling decent quality candy as well as candy dating back to even the 50's and earlier for low prices.  Just be careful because some of the candy they sell can be illigally patented. 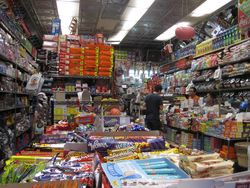 It's always best to get the original candy and not something with arabic letters on it (I bought a Kit Kat bar with arabic letters on it).  It's just safer to get the real american brands because the candies with different languages on the wrappers can have well... you never know what they're made with or how they made them blah blah blah.  But it's an awesome place and definitely worth going to even when you are not in the area. 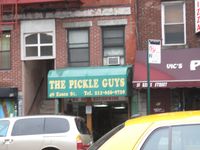 After you've satisfied your sweet tooth, walk a few blocks down Essex Street to satisfy your sour tooth at simply The Pickle Guys at 49 Essex Street.  This basement like room of salty, briny goodness does not just sell pickles, they sell pickled vegetables and olives as well. 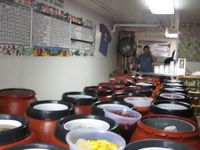 I personally like the full sour pickles, but which ever pickles you prefer, get them and they will be fantastic.  And they're so cheap! You can get 4 pickles for like 2 bucks.  So they're like 50 cents a pickle.  Not bad eh? And everything is stored in barrels just pointing that out. 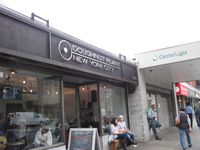 Just in case you didn't get enough junk food for one day, head over to Doughnut Plant at 379 Grand Street.  This is not a Dunkin Donuts type place.  In fact, that place can have a much greater effect on your health than Doughnut Plant, but I won't get into that.  They don't have munchkins or anything like that.  What they do have however are excellent doughnuts.  They have several different flavors to choose from, ranging from chocolate to peanut butter and jelly and even Creme Brulee.  The great thing is that the doughnuts actually taste exactly like the pure ingredients they're made with.  When you take a bite out of one of these doughnuts, you will say, and I know I say this a lot, but you will say that these are the best damn doughnuts you've ever eaten.

The Lower East Side of Manhattan is rich in history and as well has some great culinary delights.  So while you're sampling the history, check out these places and I'm sure you won't be disappointed. 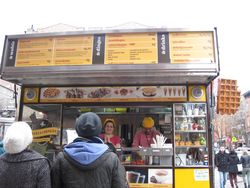 If you want a sweet treat after lunch or dinner or even for breakfast, then you should find a Wafels & Dinges truck or cart immediately! This is absolutely my favorite street food in New York City.  Personally, I go for the Liege Wafel with Nutella and Strawberries.  I'm craving one right now, but I have to tell you about it first so you can crave one too! Their waffles range from the light and crispy Brussels Waffle to the savory doughy Liege Waffle.  You can even get mini waffles on skewers.  Let me tell you about some of the toppings they have.  They have Nutella, Belgian chocolate, fruit, and even pulled pork.  These trucks and carts are scattered throughout the city and you can find their locations each day on their website.  Doesn't this one make your mouth water? 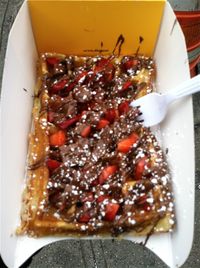 I recently caught up with one of the waffle vendors in his truck...

Well folks, gotta run to get a waffle! See Ya...

If you like Fresh Pasta, then WATCH AND READ!!

If you take the train to Fordham or the subway to Fordham Rd, walk south to 187th street, turn left and you'll soon find the little Italy of The Bronx! Arthur Avenue and a few blocks of 187th Street has some of the best italian food venues in the city.  There is everything from deli meats, bakeries, and what I am very interested in is fresh pasta stores.  Borgatti's Ravioli and Egg Noodles 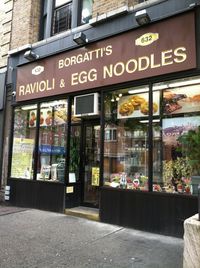 Another place that also has some amazing fresh pasta is Raffetto's.  It does not have a website, but here is the address: 144 W Houston St (b/t Sullivan St & MacDougal St).  It's located in the South Village.  The nearest subway stops are Spring st on the C,E trains and W 4th St. on the A,C,E,B,D,F,M trains.  This hole-in-the-wall type place has several different varieties of both fresh and dry pastas.  Their fresh pasta consists of regular egg, spinach, and even squid ink (black pasta!) The fresh pasta is cut by using a machine similar to a sewing machine.  The worker powers the blade by foot! It seemed that she was riding a bicycle with only one foot, but really she was moving the blade up and down and cutting the pasta piece by piece.  It was mindblowing! It's always best when you use an old machine like that instead of a machine that does the job for you.  That my friends is a sign of hard work and a labor of love to deliver best quality good for the customer.  The dry pasta comes in many different shapes, but is all regular egg pasta.  It's pretty cool how the dry pasta is stored because it's stored in dresser drawers.

Oh by the way, the video below is a review of Borgatti's. Not Raffetto's.  I'll get around to making a Raffetto's video soon.  So enjoy this video while it's here and make sure you check out these places!

Yellow Rat Bastard... A Clothing Store Other Than the Norm 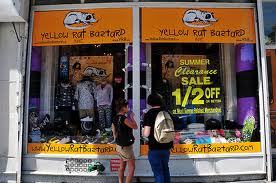 If you want to piss off your teachers at school, you might want to check this place out.  The clothing store Yellow Rat Bastard is not the typical raunchy boardwalk logo shop, but it's not your regular clothing store either.  It is situated on Broadway right in the heart of Soho.  To get there, you can take the N,R train to Prince Street or the 6 train to Spring Street.  It can be a little hard to find at first.  All you have to do is look for three window panels that have open spaces in them.  There are three yellow signs on top of the window panels that have their logo, which is a dead rat.  When you walk inside, it looks like you are walking into a castle.  The place is very dark and is lit with old chandeliers.  There is a guy standing randomly to the left of the doorway awkwardly close to you.  I think he's there to monitor the flow of what comes in and out of the store.

Anyway, when you walk in there are several different articles of clothing, mainly T-shirts that have almost every design and logo you can think of, many of which are very explicit.  They have everything from heavy metal band covers, to a variety of designs. One example is a man painting a graffiti mural on the giant wall.  You can also see many different uses of swear words on shirts that sort of make fun of actual items.  I saw a shirt that had a picture which was similar to the person on an itunes gift card.  The  message said if**k instead of itunes.  That's how crazy this place is.  I have to say, this place will really appeal to teens like me.