Nick, who oversaw the restoration of the WP Murals at SI Borough Hall used to say that humans like stories. Even though we know how the story ends we read, view, or listen to the stories again and again to see how the stories are told.

This post tells of my first encounters with the Sept 11 Come From Away Back Story.

To me, Come From Away, is a remarkable musical sound byte that condenses the stories of over 6000 people who landed in 38 planes in the town of Gander NL  when the US closed the air space on Sept 11th. The story is told with a cast of 12 who play over 70 characters who represent the locals and the "Come From Awayers" in 100 minutes. At the end, you have a sense of what it felt like to arrive on the planes or live in Gander.

In preparation for my forthcoming trip to "the middle of nowhere" Gander NL, I read these two books: 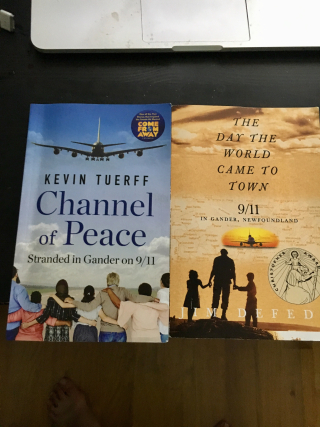 Channel of Peace is a first person account from one of the real characters represented in the show. Kevin tells his own story and how the experience affected his life. This is an especially good read for teens and young adults who were young or not alive on the day. It made me realize how difficult it was to create Come From Away. But, Kevin's story is the tear drop on the tip of the iceberg.

The Day the World Came to Town was written by a journalist at the end of 2002. There are many more stories and they are written in greater depth. I won't spoil them for you. It is a great read that perhaps covers a big chunk of the tip of the iceberg.

Soon I will be "in the place where it happened".  I am looking forward to taking the Beyond Words tour and maybe figuring out how to see a real iceberg on my free day. 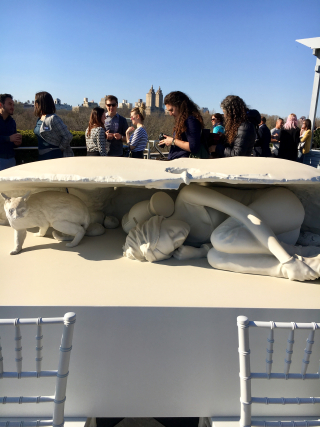 The matinee pass this year was disappointing. There are very few real films before 5. The festival is branching out to TV and virtual reality. I ended up using one of my tickets for something that was free on Friday and I had to buy a senior ticket to see my friend's son's documentary which only shows in the evening.

Here's what I'm seeing - all at Cinepolis on 23rd:

4/25  2:45        Wasted - sponsored by the Ford Foundation. This is a foodie movie about how to deal with the incredible amount of wasted food in our world. See it!

6:15         There's Johnny - preview of a streaming series about back stage at the Johnny Carson show. Sort of a color comedic version of Mad Men. Didn't know one of the cast members is the son of friends of mine. Still have no idea how/when to access the rest of the show.

4/28    2:45        The Dinner - intense, well-acted, poorly edited, depressing movie starring favorite of mine Richard Gere. Judging by commercials, it has already been released in theaters. Was sorry that I wasted a matinee pass film to see it on free Friday. It wasn't worth it.

So, tonight I went to an Open House New York lecture about Atlas Obscura. Atlas Obscura is a website by and for people seeking wonder and off the beaten path places and spaces when they travel the world or, in the case of New Yorkers, explore their back yard. It was a great lecture for OHNY volunteers. The founders have also published a book about their journeys  - traveling and creating the website.

Dylan, the lecturer, mentioned The Trash Museum as a place loved by Atlas Obscura and Open House New York. I certainly loved my visit there. When I left the Trash Museum I walked with two OHNY members who looked awfully familiar to me. They fessed up. They were the models for a portrait in the 72nd St Q train station. On my way home from the lecture, I stopped off to take a picture of their portrait. 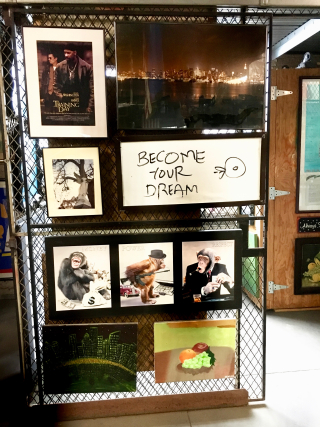 We could not touch anything. Nelson was free so I asked him to show me what looked like a piece of Mexican pottery I owned with a sex change. Speaking of change, Nelson didn't know what the hole in the top was for.

When I returned home, I found my version still sitting heavily and happily on top of my book cabinet near an ancient picture of my Guides Association tour guide friends. I've had the pottery (not the picture) for about 50 years I think.

Maybe I should write to the museum to see about a tour for guides. Hopefully, someday this stuff will be housed in a NYC Museum of Sanitation. More stuff here: