This year's festival (2011) is on Tuesday June 14th. It used to be the festival nobody knew about in its early years. I'd come home from work, go running in the Park and then when I left I'd realize that Fifth Avenue was closed and I'd say, darn I forgot to mark it on my calendar.

Now, the Festival is well publicized so your chances of getting any quality time at the Museum of your choice are slim and none but the atmosphere on Fifth Avenue is fun and it is a great inexpensive way to spend an evening.

One year, during my office worker life, I did a fundraiser for the Central Park Conservancy. My office hired a bus (they wouldn't let me escort people by subway) to take us to 103rd and Central Park West. The office bought everyone Box dinners and matched all donations made by employees. I led a walk through the North Woods, by the Harlem Meer and into the Conservatory Gardens. We ate our dinners there and then people started Museum Mile at two of my favorite museums: Museo del Barrio and the Museum of the City of New York. We had fun. One of my co-workers lived on the West Side nearby and he had never been to this part of the park. 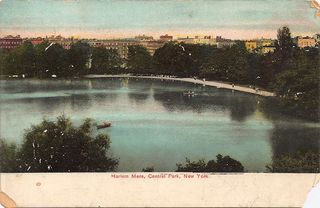 The North Woods and the Harlem Meer look different now. We had terrible storm damage a couple of years ago but new plantings are growing. I wanted to organize a fundraiser before Museum Mile but my life is too hectic at  the moment. You can always donate to the Conservancy here.

If all goes well, I'll be at Museo del Barrio around 6. If anyone wants to join me, let me know.

Posted in NYC Visitor Tools, Previews and Reviews, View from the Top of the Bus | Permalink | Comments (0)