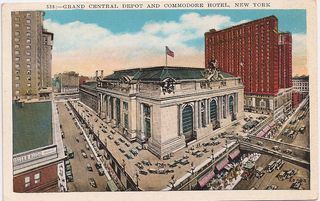 Up until this year, the thing I loved most about Summer Streets was being able to walk on the car only road that surrounds Grand Central.  The rest of the route is also great fun. Here are some scenes from last year.

This year there will be a chance to stroll the Park Avenue tunnel that starts South of Grand Central and goes to 34th Street. You can read about it here in the New York Times.

I was hoping to do this very early on the 3rd since I have a tour on the West side of 34th Street but....the tunnel route will be one way - uphill - 34th to 42nd Street. And I suspect this will be the next big summer stand in line thing. For 3 days it will compete with the Rain Room at MOMA and Zen and the Art of Waiting for the Light to Change at the Guggenheim.  Alas, on the 17th,my next chance to walk the tunnel, I will also be heading in the wrong direction so hopefully someone will report back about the experience.

Another big thing to watch out for this year....there have always been lots of cyclists during City Streets. This year we have Citi bikes. The real show will be at the bike racks as people struggle to return their bikes in time to avoid additional charges on their credit cards.