Stand-Out Covers From "The Advocate"

It goes without saying that The Advocate has been one of the primary vehicles to capture and report on the gay zeitgeist of the past few generations. The covers from the magazine that follow are from the past 25 years and were chosen based purely on my aesthetic sense and their pop culture value.

This cover story is from 1991, and it shows our 33-year-old Madonna at her lascivious best.  The issue hit newsstands shortly before her documentary Truth or Dare opened. Eight years after the first TV movie about AIDS (An Early Frost), Philadelphia was the first mainstream movie to deal with the subject.  Hanks won the Oscar for Best Actor and gave a moving acceptance speech at the ceremony.  And the song Streets of Philadelphia got Bruce Springsteen an Oscar for Best Original Song. 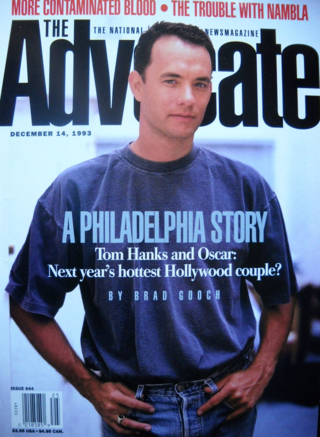 No, this wasn't an ad for Absolut.  Rather, this BBC sitcom was a celebration of decadence and it came to our shores in 1994 via Comedy Central.  And AbFab's Patsy & Eddie became the patron saints of gay debauchery. 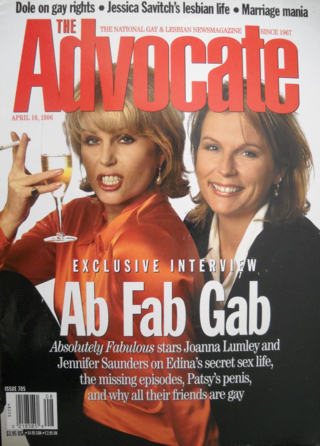 Everybody wanted a piece of Ricky in 1999 (figuratively and literally) as he appeared on the cover of most every mainstream magazine that year.  The Advocate jumped on the bandwagon as well, trying hard for a gay angle.  Ricky finally came out 10 years later. 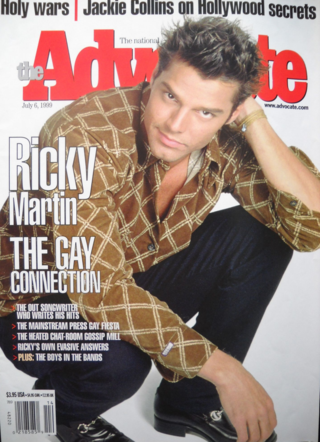 Cozy domestic bliss is portrayed by this couple engaged in pillow talk on a 1998 cover.  A few years later the magazine published an article about the trend in couples introducing a third party into their relationship.  And in the past few years there has been a surfeit of articles depicting the joys of couples with children in tow.  Perhaps a cover story in the not too distant future will be titled "Monotony." 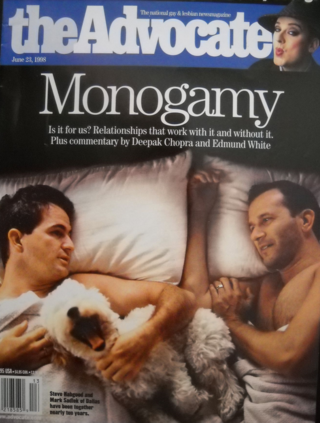 This 2006 cover captures a beautifully tender moment between Jack Twist (Jake Gyllenhaal) and Ennis del Mar (the late Heath Ledger).  The movie pulled in mainstream audiences, and won Ang Lee an Oscar for Best Director (but Best Picture was not to be). 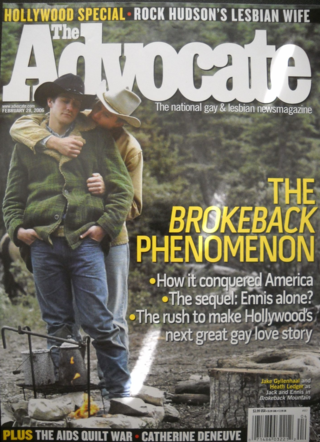 Before reading the cover story about him, I wasn't familiar with this adorable, openly gay Australian diver.  The issue hit newsstands a week before the 2008 Beijing Olympics, and after reading it I was rewarded by seeing him win an unexpected gold medal.  And Matt got a second cover story the following year. 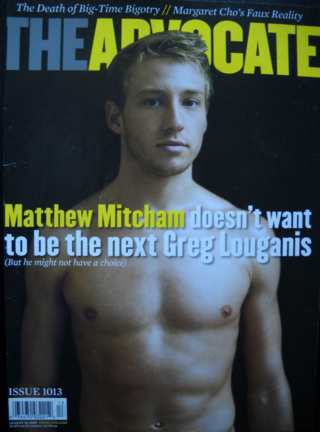 From 2010, a lovely cover as well as an equally lovely profile of this "out" Tony Award winning, most famous for her role as heterosexual Miranda on Sex & the City.  A few years earlier an Advocate cover was given to the show's Kim Cattrall. 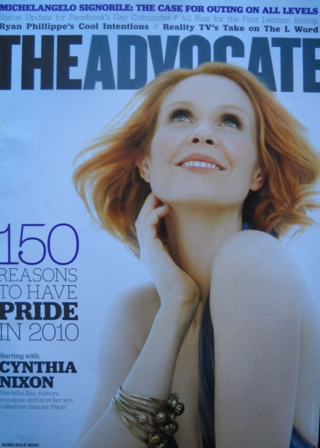