Most Broadway musicals feature at least one peppy, throwaway tune (often referred to as "ditties"), usually no longer than two-and-a-half minutes, as a crowd pleaser - and I'm a sucker for them.  Here are some of my favorites:

Crime of the Century (2:06) - From Ragtime. Through much of the song, the Evelyn Nesbit character from the 1998 production sang while swinging high in the air on a swing.  However, when I saw the 2010 revival I was disappointed because this number was shortened and the setting wasn't as grand. 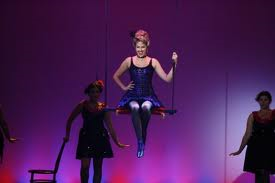 Pick a Little, Talk a Little (2:29) - From The Music Man, much of the song is a mix of rapid-fire singing and catty dialogue, which work perfectly together to create the effect of cackling hens.

The Story of Lucy & Jesse (2:47) - I love this brassy song from Follies because of its tongue twister lyrics.  For example: "Lucy wants to be dressy, Jessie wants to be juicy, Lucy wants to be Jessie and Jessie Lucy."  I especially like Sondheim's choice of the French word "precis" in one of the verses.  I'd love to see Madonna perform this song. 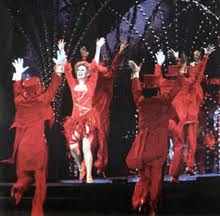 When Velma Takes the Stand (2:03) - From Chicago, it's largely a spoken number with a bubbly jazz instrumentation with a chorus sung by male jurors.

Chicago (1:37) - From Pal Joey, this is not Frank Sinatra's song Chicago.  Sung by chorus girls in stereotypically daffy/gold digger tones.

The Rumor (1:52) - From Fiddler on the Roof, the song ends with Yente, played by Bea Arthur in the original 1964 production, saying "And that's what comes from men and women dancing!" 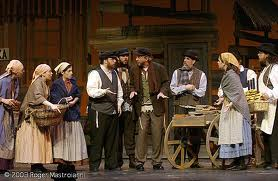 One Plus One Equals Three (2:35) - From Sideshow, a rather peculiar show from 1997 in which the main characters are Siamese twin sisters who perform in a freak show.  In this song, the twins Daisy and Violet, and Violet's fiance sing about how much fun the three of them will have once the two of them are married (wink, wink). 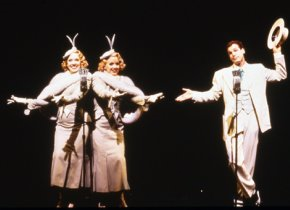 Rainbow High (2:18) - This strident number from from Evita is a big favorite with gay audiences because of its "image is everything" message.  The song could also be the inspiration for Sarah Palin and Michelle Bachman, with lyrics such as, "I came from the people, they need to adore me, so Christian Dior me, from my head to my toes, I need to be dazzling, I want to be rainbow high!" 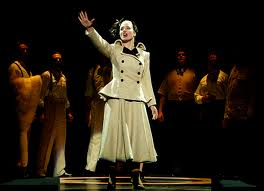 Charm Song (1:43) - The spoken intro of this tune from 2001's A Class Act pretty much sums up the theme of this post: "It don't have to do a lick of work, it just has to make the audience smile."  It was one of the few upbeat numbers from a show that dealt with a neurotic fellow battling depression.  That fellow was Ed Kleban, Tony Award lyricist of A Chorus Line, who died in 1987 at the age of 48 - by coincidence, the same year as the death of the show's director, Michael Bennett. 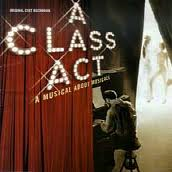 My Girlfriend, Who Lives in Canada (1:18) - from Avenue Q, it's sung by the closeted character/puppet, Rod, who creates a fictitious "beard": "Her name is Alberta, she lives in Vancouver."

Ah, Paree! (2:00) - In another number from Follies, a French chanteuse goes through a list of world-class cities and their famed attributes.  "New York has neon, Berlin bars, but ah, Paree!".  My favorite description is of Athens in which she refers to its "lovely debris".

Witch's Rap (2:45) - Calling this tune from Into the Woods a "rap" is too harsh a description for this patter-like song.  Check out the original production on DVD because only Bernadette Peter's version will do. 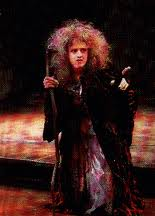