Politics - The two biggest stories of 2011 were New York state's legalization of same-sex marriage(coinciding with Gay Pride weekend) and the ending of the U.S. military's shameful "Don't ask, don't tell" policy.  But we could still count on continued intolerance by Republicans as they booed a gay soldier during one of the Republican debates.

Gay-themed Movies of Note - Weekend; Heartbeats; Beginners; and the documetary Making the Boys.

Music - Erasure's Then I Go Twisting and Kelly Rowland's What a Feeling; in February Lady Gaga's single Born This Way became the 1,000th song to hit #1 in the history of Billboard's Hot 100 chart.

Chaz Bono - A documentary and book about Chaz's female-to-male transition received considerable attention as did his appearance as a male contestant on Dancing with the Stars.  (Carson Kressley also competed).

A fire in November in the harbor of Fire Island Pines destroyed the Pavilion dance club and Sip-n Twirl bar (and a number of other businesses).

Talk Show Roulet - Without Oprah's presence housewives apparently weren't interested in an entire hour of Nate Berkus (left) as his home design show was cancelled after just one season.  The same fate may await Anderson Cooper's snoozer of an afternoon talk show which debuted in the fall (housewives may not be as enamored with him as gay men at the David Barton Gym are).  And Rosie O'Donnell tried for a comeback with a talk show on Oprah's OWN cable network.

On Curb Your Enthusiasm Larry David coined the term "pre-gay" to describe his girlfriend's delightfully precocious young son who showed all the obvious traits of being gay (he was a big fan of Project Runway).  The little boy is the spitting image of Kurt from Glee.

Saturday Night Live aired a music video titled "It's OK If It's In a Threeway", featuring Justin Timberlake, Lady Gaga and Adam Samberg.  The show also had a hysterical skit about a game show called "Who's on Top?" in which non-gay male celebrities were paired up and constestants had to choose which one would be the "top" if the celebs were engaged in gay sex. 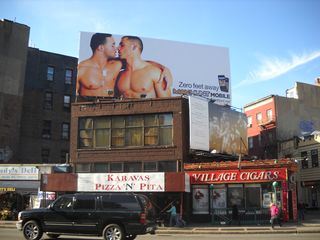 Finally, as the year came to a close a sexy billboard for Manhunt Mobile went up, overlooking Sheridan Square, bringing back fond memories of the gay West Village of the '70s and '80s.

At a performance a friend recently attended of Hugh Jackman's show Hugh auctioned two t-shirts (one for each act) and belt at each show, and offered to pose backstage with an audience member for $2000 - there was a line!

Hugh has now single-handedly raised over $1 million for Broadway Cares, and will continue his curtain speeches through the end of the run.