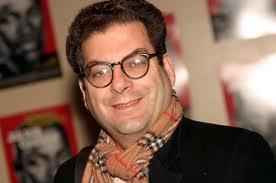 Gay bon-vivant Michael Musto was born in Brooklyn on Dec. 5, 1955.  He is best known for covering New York City nightlife and writing about it in his column "La Dolce Musto" in the Village Voice.  His specialty is the "blind item" whereby he describes celebrities' indiscretions without revealing who these individuals are.  In the fall of 2011 he published a book of essays humorously titled Fork on the Left, Knife in the Back.

In my mind, Musto is a cross between Mr. Rogers, Rollerina, Quentin Crisp and Liz Smith - but with a decided edge.  And although he has a lot of "dirt" on celebs he's not heavy handed about how he uses this information, unlike Perez Hilton - or J. Edgar Hoover.  And despite being a keen observer of the celebrity demimonde he doesn't come across as star struck.  He's just a kind, avuncular sole with a droll sense of humor. 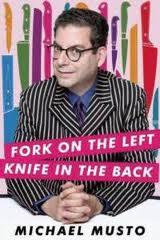 Somewhat like the New York Times' fashion photographer, Bill Cunningham, Musto can be spotted riding about town on his bicycle.  And on a number of occasions I've seen him strolling on the beach in Fire Island, usually dressed similarly to how he dresses in the City.

I'm delighted you saw it! Thanks for giving me plenty of laughs over the years.