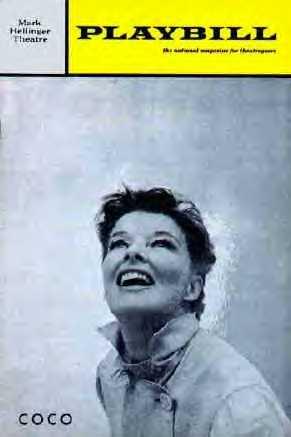 The thought of Katharine Hepburn singing seemed as preposterous as Liberace playing the banjo - and yet somehow it came to pass.  She starred in the Broadway show Coco, a musical about the life of famed fashion designer Coco Chanel.  It opened on December 18, 1969 and ran for nine-and-a-half months.  Nominated for six Tony Awards, including Hepburn for Best Actress, the show won in two categories (Rene Auberjonois for Best Featured Actor and Cecil Beaton for Costume Design).  No doubt tickets for this show were in the Christmas stockings of many gay men that holiday season. 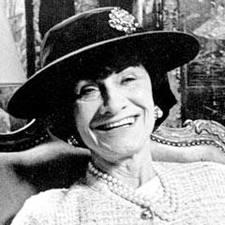 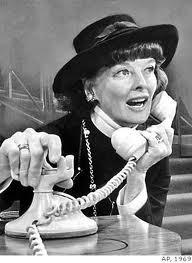 Hepburn was 62 at the time and this was the only musical production of her career.  Legend has it that Chanel was miffed when she realized it was Katharine and not Audrey Hepburn, twenty-one years younger than Kate, who would be portraying her.  Chanel died a few months after the show closed (at the age of 87.)

Nearly forty years later, in September 2008, Shirley MacLaine portrayed Chanel in a made-for-cable movie on Lifetime (a non-musical version).  She played the older Chanel while another actress played the younger Coco.  (It was jarring that while the younger actress affected a French accent MacLaine didn't bother with one.)

The number from Coco that was performed at the 1970 Tony Awards was the lengthiest in Tony history - 16 minutes!  Here is a portion of it: 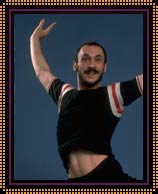 I saw Ms. Hepburn in "Coco", amazing to think that she was only 62, young by today's standards. A friend was assistant to the lighting designer and rehearsals in the theatre started with Ms. H opening all the windows --- the company wore lots of sweaters.

Hepburn played the show until it recouped, then went on the road for a few select cities including Cleveland. Danielle Darrieux replaced her in New York, but the box office fell way off. Gloria Swanson auditioned as the replacement, wearing a Chanel suit borrowed from her daughter. She was a legit singer (her sound films included musicals and she did a demo of a musical based on "Sunset Blvd", not the one that eventually came in by Sir Andrew). Her audition went splendidly, but machinery onstage with the revolving staircase was very intricate. Ms. Swanson was game to do the part, but starting to become frail and those in charge feared an onstage accident with machinery.

Ginger Rodgers did a tour in the summer tents but refused to say the word "shit" which Hepburn said with relish. Rodgers substituted the French equivalent, "merde." "Coco" was Alan Jay Lerner's last financial success, if you don't count revivals of "My Fair Lady" and "Camelot". Also Andre Previn's last excursion into musical theatre. He wrote an opera based on "Streetcar Named Desire" which is not part of the basic repertoire, although it was telecast.

Rob -- the real triumph of COCO was that of the choreographer Michael Bennett (CHORUS LINE).

Bob Avian, who assisted him, told a Pines audience that Hepburn was a nightmare to deal with. But given her singing voice and awkwardness, that may have been a product of insecurity.

All of the dresses shown in the video also appeared in the show in black. (Chanel was the creator of the little black dress.) A designer friend of mine commented on how great they had looked in black, and how awful they looked when they reappeared in red. (Red is now thought of as the trademark color of the Italian designer Valentino, who has his own museum in Rome.)

The photo on the PLAYBILL was taken by B'way producer (and sometime Center DJ) Ted Snowdon on his property in New Paltz. Merry Xmas!