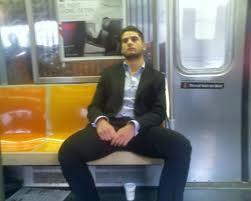 The short-lived website Subway Crush displayed photos submitted by admirers of cute/hot guys riding New York City's subway lines (New Jersey's PATH as well).  It went live in June 2011 after its creators met with success with their London site called Tube Crush.  Because the photos reflected the taste of those submitting them, there was an array of types to salivate over.  Some of the cuties were dressed in workout gear; others were wearing suits; some displayed bulging biceps, hairy thighs or muscular calves.  They were shot in various poses, i.e,. eyes closed; sitting with legs spread; standing at attention while grasping the pole in the middle of the car; leaning against the subway door.

Most of the guys appeared to be in their twenties or early thirties.  Although most were hooked up to their music or engaged by their iPad, a few made eye contact with the camera.  There were hundreds of photos to look through - and admirers could rate them.  Besides the photos, amusing titles and brief, witty commentaries were provided by the site masters.  These comments were written as beguiling come-ons and never used as an excuse to trash the subject.

It was great fun looking over them, wondering if you might come across someone you recognized - or perhaps even seeing yourself!   It's a pity that it's no longer in service, apparently taken down in early 2014.  In its honor, the photos below were those I took in the summers of 2017 and 2019, which I would have considered submitting ... 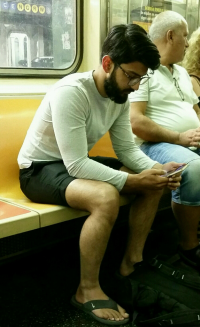 Intently reading, on the Downtown 1 train 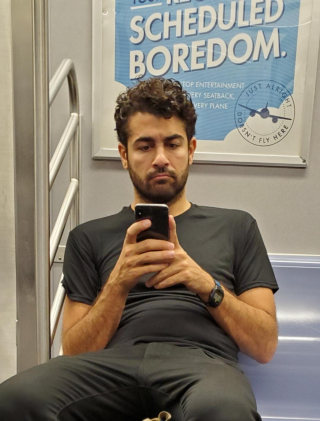 On the E train, summer of 2019. Perhaps he was taking a picture of me?

They are about to Launch their Boston site www.bostontcrush.net the holding page is encouraging people to submit pictures!

Thanks for the update!