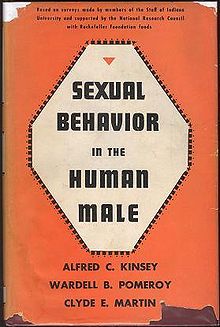 The landmark Sexual Behavior in the Human Male was released on Jan. 3, 1948 (a report about women was published five years later).  Based on information gathered during face-to-face interviews by Dr. Alfred Kinsey (right) and his staff from the Institute for Sex Research at Indiana University, it reported on sexual practices not usually spoken about in "polite" company.  Using a scale of 0-7, Kinsey classified the degree of heterosexual and homosexual orientation.  From this famous "Kinsey Scale" it was determined that 10% of men were homosexual - for a period of at least three consecutive years.  This qualifier was largely overlooked and the 10% is the headline that stuck.  It's long been questioned and studies over the past decade report figures in the 5% to 8% range (higher, of course, in certain cities and neighborhoods).

In addition to the famous 10% finding, another was that 37% of men claimed to have had at least one homosexual experience in their lifetime.  However, despite Kinsey's figures showing homosexual experiences weren't uncommon, they had no impact on how homosexuals were viewed by the public during the conformist 1950s.  Individuals found to be homosexual were often institutionalized, blackmailed or lost their jobs - all in an attempt to keep them marginalized from mainstream society.

In autumn 2004 the movie Kinsey came out, starring Liam Neeson and Laura Linney (who received an Oscar nomination for Best Supporting Actress).  Though Kinsey was ostensibly heterosexual, in one scene he has sex with one of his male assistants (played by Peter Sarsgaard.)  It was named Outstanding Film of the Year by GLAAD.  However, like many critically acclaimed films, it wasn't a hit, grossing just $17 million. 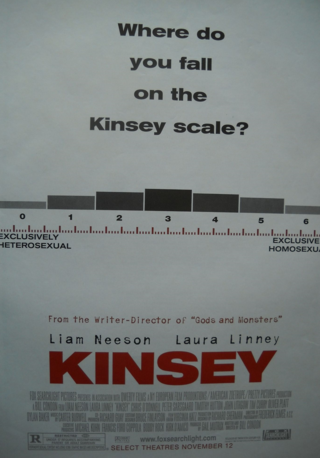 I love that Liam Neeson, but I felt the documentary was all-in-all much more satyifisng. It addresses Kinsey's strategies for encouraging forthcoming interviews and shows why his scientific training and commitment was ideal for this first-of-its-kind study. There is stuff on the personal life and character of Kinsey, too, but somewhat de-emphasized compared to the movie.The great legacy from Kinsey that the medical and/or moral concepts of normal and abnormal obscure the scientific study of (and thus the phenomena) of sex.