Jan 15, 1983 - The gender bending singer known as Boy George gains mainstream popularity as his group Culture Club's first single, Do You Really Want to Hurt Me, enters the Top-40.

Feb 25, 1983 - Playwright Tennessee Williams dies at the age of 72 in his hotel room in midtown Manhattan.  The exact cause of his death is still a mystery, but legend has it that he choked on the cap from a bottle of poppers which he had opened with his teeth.

April 13, 1983 - On Dynasty, Krystle & Alexis fall into a swimming pool during their famous catfight.

June 5, 1983 - During his acceptance speech at the Tony's for Torch Song Trilogy winning for Best Play, producer John Glines becomes the first person ever to acknowledge a same-sex partner on a major televised awards show. 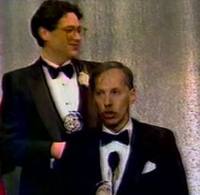 July 20, 1983 - Massachusetts Democrat Gerry Studds becomes the first openly gay member of Congress when he comes out on the floor of the House after being censured for having sex with a Congressional page.

July 21, 1983 - Diana Ross gets soaked during her free concert in Central Park.

Aug 21, 1983 - Opening night for the Broadway musical La Cage aux Folles, featuring George Hearn's show-stopping anthem I Am What I Am.

Dec 10, 1983 - For the first time, The New York Times mentions a same-sex partner in an obituary, for 53-year-old actor David Rounds.