Looking Back at LGBT History: 1965 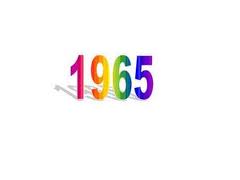 Feb 14, 1965 – The Denver Post begins a six-part series about the problems homosexuality poses to society.

March 2, 1965 - The Sound of Music, oozing with gay undertones, opens in theaters.

April 17, 1965 - The first official protest outside of the White House by a gay rights group takes place, organized by the Mattachine Society.