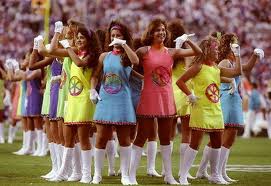 Does a certain amount of time have to pass before an event or performance is given the designation of "camp".  For example, when it was airing, did we realize the camp factor of Eva Gabor in Green Acres, Phyllis Diller in The Pruitts of Southampton, or Peggy Lee's song Is That All There Is?  The same holds true for the halftime show from 1982's Super Bowl in which the squeaky-clean youth organization known as "Up With People" performed. (Fun fact: Glenn Close was once a member.)

Up With People also performed at Super Bowls in 1976, 1980 and 1986.  However, to dissuade viewers from switching channels, halftime shows became slick productions featuring marquee celebs (remember Janet Jackson and Justin Timberlake?).  Compared to today's shows there's a charming quaintness to the simple "let's put on a show" quality from yesteryear - not too dissimilar from stage shows put on for vacationers on board cruise ships - or at Disneyland.  (And with plenty of gay folk providing the entertainment.) 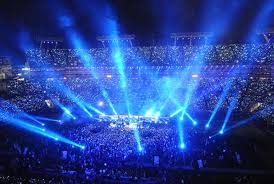