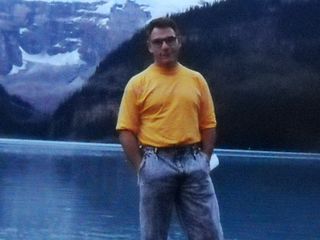 Although AIDS had claimed a number of my friends and acquaintances, I'd been spared the death of anyone close to me - until Jan. 4, 1991 when I got word that an ex-lover, Rick Damiata, had died of AIDS complications.  We were together for 3-1/2 years, until early 1985, but remained close thereafter.  He was the only boyfriend I lived with (we shared a garden apartment on W. 15th St.).  He was 42.  The last time I saw Rick was six weeks earlier, a few days before Thanksgiving.

A lasting memory of that visit was that as I was getting ready to leave the hospital, Rick called me to his bed to tell me something.  Then one of his sisters walked into the room to get her purse and he lost his train of thought (he suffered from dementia in the last year of his life and this happened regularly).  To this day I wonder what it was he was going to say to me.

I took the train up to Connecticut to attend his funeral in Middletown where he grew up.  This was the first time I truly grieved at anyone's death.  When I walked into the church I couldn't believe the casket held his body.  Covering the casket was an Indian blanket to honor Rick's devotion to American Indian culture.  He taught math at reservations in Saskatchewan and South Dakota and was an accomplished "fancy dancer", competing at pow wows.  One aspect of Indian culture Rick embraced was its reverence for their elders and I remember how thrilled he was upon meeting my grandmother when we visited my parents during Christmas 1982. 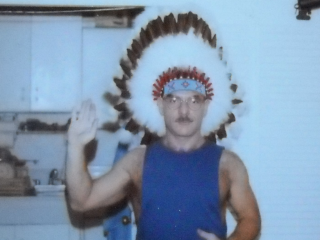 Returning to the City on Metro North after the funeral our trip was delayed as the train approached Penn Station.  A smoke condition inside the station forced the train to sit just outside the tunnel leading into the station for three hours (9 PM-midnight).  I commented to the friend I was traveling with that Rick was surely looking down on us and having a good laugh at our predicament.

I carried guilt over Rick's death because he moved to New York to live with me (that's us in the photo in 1983) and I blamed his living here for his contracting HIV after we broke up.  Then in the summer of 1995, a little more than four years after his death, I had a momentous dream in which I encountered Rick at a campsite.  He sat with me and assured me that what had happened between us was water under the bridge and that I had to get on with my life.  I woke up in tears - tears of joy. 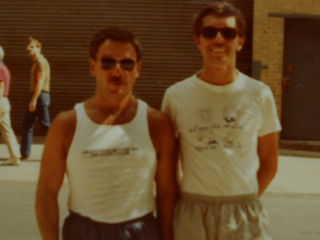