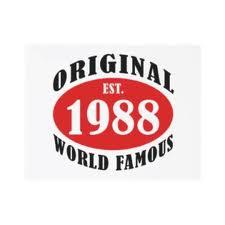 Feb 20, 1988 - Brian Boitano wins a gold medal for the U.S. in Men's Figure Skating at the Winter Olympics in Calgary.

April 11, 1988 - Cher wins the Oscar for Best Actress for her role in Moonstruck.

May 3, 1988 - Madonna makes her Broadway debut in David Mamet's Speed the Plow.

July 1, 1988 - During an appearance on David Letterman, Sandra Bernhard brings out "gal pal" Madonna and they proceed to act obnoxiously.

Sept 19, 1988 - U.S. diver Greg Louganis hits his head on the diving board while competing at the Summer Olympics in South Korea and still wins a gold medal.