Jan 6, 2001 - Diane Whipple, a lesbian lacrosse coach, was mauled to death in front of her partner by a neighbor's dogs in the hallway of their apartment building in San Francisco's Pacific Heights neighborhood.

March 4, 2001 - Glenn Hughes, the original Leatherman from the Village People, dies from lung cancer at the age of 50.

April 1, 2001 - The Netherlands is the first nation to legalize same-sex marriage.

June 3, 2001 - Six Feet Under debuts on HBO.  One of the couples is David and Keith, an interracial couple in a tempestuous relationship.

June 10, 2001 - Beginning of a 3-episode arc on Sex & the City in which Samantha has a lesbian affair with a Brazilian artist from Charlotte's gallery (played by Sonia Braga).

July 27, 2001 - The movie Hot Wet American Summer opens.  And although it is a huge flop at the box office (grossing less than $300,000), the movie is notable for a gay make-out session between Bradley Cooper (in his first movie) and Michael Ian Black.  (The movie has since developed a cult following.)

Nov 4, 2001 – Ellen DeGeneres hosts the Emmys (delayed by the 9-11 attacks), and to open the telecast walks on stage wearing a swan costume, similar to that worn by Bjork at this year's Academy Awards. 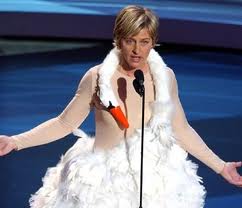 Dec 22, 2001 - Lance Loud, gay son of the family depicted on PBS's landmark reality series, An American Family, dies from hepatitis-C at the age of 50.