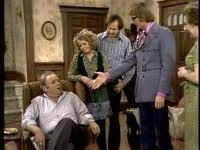 All in the Family had been on the air for just a month when it aired an episode in which Archie mocked a friend of Mike and Gloria's (right) who he incorrectly assumed was gay.  However, Archie soon discovered that it was one of his own friends who was gay.  Titled "Judging Books by Covers" its message that gay people aren't all effeminate and effete conveyed an important lesson very early in the gay liberation movement.

Mike: You know something Archie, just because a guy is sensitive, and he's an intellectual and he wears glasses, you make him out a queer.

Yet it turned out that Archie's friend Steve, a former pro football player, was the "flower" (as Edith referred to him).  Steve gave Archie this news while they were arm wrestling at Kelsey's Bar.

Although I have no memory of the play The Boys in the Band (1968) or the Stonewall riots (1969), I remember watching this particular episode of All in the Family.  I was 13 years old at the time and had no clue what a homosexual was yet this episode communicated an important message.  40 years later I appreciate how groundbreaking this episode was.