From Icon to Punchline: The Tragic Demise of Whitney Houston

As much as I enjoyed her music (see the list of my favorites below) I found myself more angered than saddened by Whitney Houston's death.  She seemed to have it all but squandered her talent, much of her fortune and the public's goodwill.  Ironically, one of her hit songs was titled Didn't We Almost Have it All?  For a brief time it seemed she did.

She was embraced in gay circles for her various dance-oriented hits which evolved from upbeat pop in the early years to cynical commentaries on life.  These later songs, It's Not Right But It's OK and I Learned from the Best, became huge club hits.

The defiant tone of her later hits corresponded with her confounding downward spiral.  Sadly, the more of a mess she became the more popular she seemed to become with her gay fans.  A parody of her video for It's Not Right that was regularly shown in gay clubs showed a female impersonator with coke coming out of her nose interspersed with the "crack is whack" comment the real Whitney made during her infamous interview with Diane Sawyer.  She went from being an icon to a punchline. 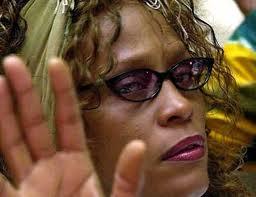 Unlike icons before her who also died young, e.g., Marilyn, Judy and Diana, I doubt Whitney will ever be thought of in the same loving way as they are.  Sure, she was a tragic figure, but nowhere near as sympathetic a figure as the other three.  Of course, the others didn't live during the era of reality TV.  Unfortunately for Whitney her reputation never recovered after she appeared on her husband's reality series Being Bobby Brown.  But even before this show she had become notorious for being a nasty bitch with a huge chip on her shoulder.

Although she's gone her magnificent body of work remains - and we'll no longer be witness to the train wreck that her life turned into over the past 15 years.

And now for my twelve favorite songs (in chronological order):