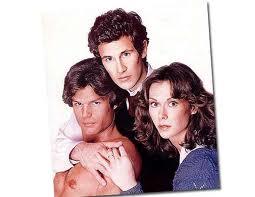 Just in time for Valentine's Day the movie Making Love opened on February 12, 1982.  It starred Kate Jackson, Michael Ontkean and Harry Hamlin.  Jackson and Ontkean play Zack and Claire, a happily married couple with successful careers, but it turns out Zack is struggling with same-sex urges.  One night he gives in to these urges and goes "all the way" with Hamlin's character, Bart, one of his patients.  Zack falls hard for him, but Bart is a lothario and not interested in settling down.  Despite the heartbreak, Zack divorces Claire, moves on with his new life and finds a partner (as does Claire).  And in perhaps a movie first, the gay characters weren't self-loathing nor did the movie end with a suicide. 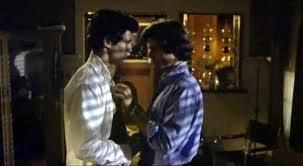 Of the three principal actors Kate Jackson was probably the biggest name.  She had risen to stardom in Charlie's Angels and would star in another hit TV show in 1983, The Scarecrow and Mrs. King.  Before Charlie's Angels she and Ontkean starred in The Rookies.  Some say that the careers of Ontkean and Hamlin (pictured, left) were hindered by their roles in this movie.  It was a brave decision; no "name" actors would consider the roles, especially with scenes showing the two men passionately kissing.  (Even twenty-three years later eyebrows were raised when Jake Gyllenhaal and Heath Ledger starred in Brokeback Mountain .)

Hamlin and Ontkean are probably best known for their later roles on TV, Hamlin on Law & Order; Ontkean on Twin Peaks.  In later years Ontkean was loathe to talk about his Making Love role and even attempted to have a clip of the movie removed from Vito Russo's documentary The Celluloid Closet.  However, Hamlin appeared in the documentary and easily discussed his role in this landmark movie.

I saw the movie a few weeks after it opened.  I went with an ex-boyfriend and we saw it at a theater in Manhattan's Murray Hill neighborhood.  My ex's life somewhat mirrored Zack's.  He was married for quite a few years before deciding to live as a gay man.  However, unlike Zack, after a few years he regressed and married a woman once again.

To read a comprehensive account of Making Love I recommend its Wikipedia page.

I went to a special screening of this movie just before it opened. I was living in Los Angeles then and was 23 years old. Gee-zus. - Mark