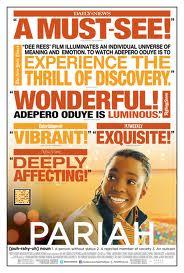 Independent films have a tough row to hoe.  Even the most acclaimed of them find it difficult to gain wide distribution in theaters.  So imagine the challenge faced by the movie Pariah, an indie that tells the story of an African American teenager in the process of coming out as a lesbian.  Even Tyler Perry's broad comedies starring Madea open in half as many theaters as a typical Adam Sandler flick, so the hurdles faced by an indie movie targeting a niche audience (lesbians) within an already niche audience (African Americans) were great.  Spike Lee, who was executive producer of Pariah, has expressed similar frustrations with the marketing of his own films.

Despite the critical acclaim it received at Sundance last year, Pariah never appreared in more than a handful of theaters nationwide (and it received no boost in theaters during February's Black History Month).  But where it played it did well (based on per-screen revenue), but it will still gross less than $1 million.  Thankfully for those who live outside the few markets where the movie played there's always Netflix.