The Year in LGBT History: 2006
From Icon to Punchline: The Tragic Demise of Whitney Houston

Feb 1, 2007 - The Sarah Silverman Program debuts on Comedy Central.  Two of the sitcom's characters, Brian and Steve, are a schlubby gay couple who are the antithesis of the Chelsea boy stereotype. 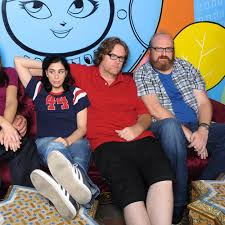 Feb 6, 2007 - Snickers causes a mini-controversy with its ad during the Super Bowl showing two blue collar types who inadvertently kiss each other on the mouth while eating a Snickers Bar.

March 22, 2007 - On Ugly Betty, Betty agrees to play the role of gay co-worker Marc St. James' girlfriend when his mother comes to town (he played by Michael Urie, she played by Patti LuPone).  However, when mom makes disparaging remarks about Betty's flamboyant 14-year old nephew, Justin, Marc lashes out and tells her he's gay.

May 25, 2007 - Rosie O'Donnell's turbulent tenure on The View ends after she has one last on-screen outburst.

July 9, 2007 - The Advocate announces that it will send its magazine through the mail without a plastic overwrap unless otherwise requested by a subscriber.

Aug 17, 2007 - Disney Channel's wildly popular High School Movie 2 premieres to record ratings and features perhaps the gayest musical number ever devoted to baseball.  The song is called I Don't Dance and in it show tune-loving Ryan demonstrates to the school's jocks how the leaps and pirouettes of dancers aren't dissimilar to the acrobatics engaged in during a ballgame.  The song's chorus, "Hey batter, batter, hey batter, batter - SWING" is delightfully catchy.

Sept 10, 2007 – Gay judge David Young’s syndicated TV show debuts.   It’s tagline is “Justice with a snap”.  Despite the gay angle (however, plaintiffs/defendants were of all sexual orientations) the show was unable to make headway against the glut of judge shows already on the air and was cancelled after two seasons.

Dec 31, 2007 - Comic Kathy Griffin and CNN reporter Anderson Cooper bring in the New Year together on CNN for the first time.

(To read about LGBT pop culture and history from other years double click here.)