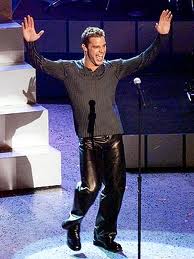 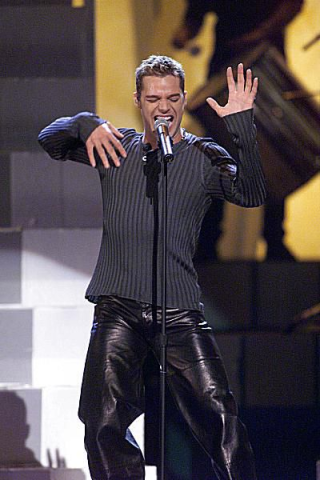 27-year-old Ricky Martin went from being a sexy Latin pop star to a studly mega-star overnight after his hip-swiveling performance of his international hit The Cup of Life (La Copa de la Vida) at the Grammy Awards on Feb. 24, 1999.  It was a performance that ranks up there with Michael Jackson introducing his Moon Walk in 1983 at the Motown 25th Anniversary special and Elvis' first appearance on the Ed Sullivan Show.  However, truth be told, I thought Martin's performance was relatively tame, and what I found curious was how unresponsive the audience was - at least until the very end (perhaps it was because the song wasn't a hit here in the U.S.)  View the clip here.

A few months later Martin's single Livin' la Vida Loca (from his first English language CD) was released and zoomed to #1, where it stayed for five weeks, vying with Cher's Believe and Deborah Cox's Nobody's Supposed to Be Here as the song of the summer.  The song's video featured a woman dripping hot wax on Ricky's chest. After about eighteen months Martin seemed to take on a lower profile (relative to 1999 levels).  Perhaps it was due to some backlash after he performed at the inauguration of George Bush in 2001.  An uptick in attention occurred in 2004 when a young guy named William Hung gained notoriety on American Idol for his tone-deaf rendition of Martin's single She Bangs.

In the 21st century, Ricky Martin's life entered a new phase.  After fathering twin boys in 2008 he finally came out as gay after years of speculation (he described himself as "a fortunate homosexual").  Then at the end of 2010 he published his autobiography titled simply Me.  In 2012 he added acting to his resume, playing the role of Che in the Broadway revival of Evita.  And in 2018 he appeared in Ryan Murphy's FX mini-series The Assassination of Gianni Versace, playing the role of Versace's boyfriend.  Happily, he's eased into middle age very nicely (he turned 45 at the end of 2016) - and is still as hot as ever. 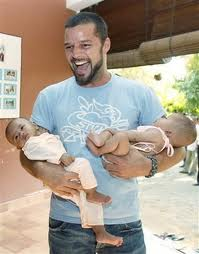 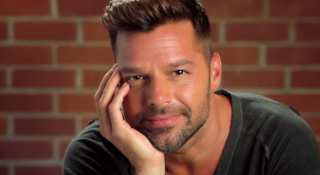