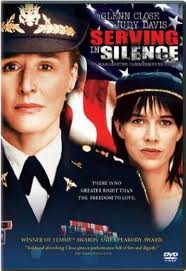 Serving in Silence was a TV movie based on a true story.  Margarethe Cammermeyer, a colonel in the Washington national guard, was honorably discharged in 1992 after revealing her sexual orientation (the year before "don't ask, don't tell" was instituted).  At the time, she was the highest ranking officer to be discharged for being gay.  However, in 1995 a judge ruled her discharge unconstitutional and she was reinstated.  The movie aired on Feb. 6, 1995.

Starring Glenn Close as Cammermeyer, and Judy Davis as her partner of sixteen years, the movie gained further cache by having Barbra Streisand as one of its producers (pictured, below, with the real Cammermeyer).  Silence got a 13.4 household rating/21 share, and ranked among the week's top-20 shows among the key female age groups of 18-49 and 25-54.  Close would win an Emmy for Best Lead Actress in a miniseries, and Davis for Best Supporting Actress. 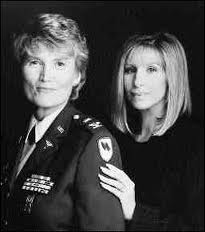 What also made this movie noteworthy was the fact that it was the last gay-themed TV movie to air on network TV.  After the networks aired about a dozen such movies (beginning in 1972 with That Certain Summer), all future movies with gay storylines aired on cable networks, such as Lifetime, A&E, USA, and the pay networks Showtime and HBO.