The Supremes were a favorite of Ed Sullivan.  In a 5-year period between 1964-69 they performed on his Sunday variety show fourteen times - and on February 15, 1970 they made their first appearance on the show since Diana Ross left the group in January.  Now led by Jean Terrell, they performed their first single Up the Ladder to the Roof. (If I were a drag queen this is one of the songs I'd love to perform.)  They wore marvelously outrageous form-fitting sequined jumpsuits in Valentine's Day red (see video clip below). 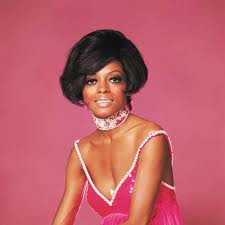 Legend has it that Diana was pissed that these new Supremes hit the charts first (especially since Someday We'll be Together was originally supposed to be her first single rather than the last as a member of the Supremes.)  But "Miss Ross" would more than make up ground later in the year with her #1 smash Ain't No Mountain High Enough.  After that she had eleven more top-10 hits (five which topped the Billboard Hot 100).

And although their first two singles, Ladder and Stoned Love, were top-10 hits, the new Supremes would have no other singles to chart that high (but they'd have a number of #1 dance hits including I'm Gonna Let My Heart Do the Walking).

An assortment of The Supremes' TV appearances are available on Amazon on the DVD The Supremes - The Definitive Performances 1964-69.