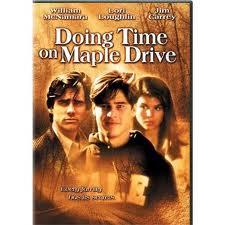 The TV movie Doing Time on Maple Drive aired on Fox on March 16, 1992.  Much of the publicity surrounding it was due to the casting of comic Jim Carrey in his first dramatic role.  He portrayed an alcoholic son in a tightly wound family.  Meanwhile, the family's younger son, Matt, their pride and joy, attempts suicide rather than reveal that the reason he and his fiance broke their engagement was because he's gay. 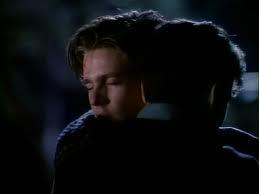 The father was the parent who was more understanding of his gay son but mom was in vehement denial - despite the fact she had once walked in on Matt and his college roommate - and they weren't studying.  At the movie's end she's still unaccepting.  Matt, meanwhile, reaches out to his spurned college boyfriend (pictured).  What made Maple Drive somewhat unique from other TV movies that touched upon gay issues was the fact that its gay storyline here was just one of a number of plot points.  It was nominated for an Emmy as Best TV Movie but lost to Miss Rose White (a Hallmark Hall of Fame production.)

The actor who played the gay son, William McNamara, later portrayed Montgomery Clift in a 1995 TV movie on NBC about Elizabeth Taylor.  And much later, in 2009, Jim Carrey portrayed a gay man in the movie I Love You, Phillip Morris.