Gay author John Rechy was born in El Paso, Texas on March 10, 1934.  He's written more than a dozen novels, with perhaps the best known being City of Night (1963), Numbers (1967) and The Sexual Outlaw (1977).  His stories tell of the loneliness and desparation lived by street hustlers, the secret liasions of closeted men and the discrimination practiced against homosexuals - all pioneering themes for their time. 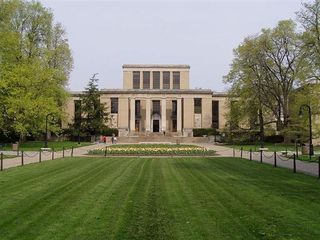 I have an amusing story to share about Rechy's novel City of Night.  It was Fall 1977, I was starting my junior year at Penn State and in the early stages of coming out.  I went to Pattee Library (pictured) on main campus at University Park to see if they carried Rechy's book.  They did, but, curiously, it was kept in the section of the library called "Special Collections".

That's right, because of its subject matter Rechy's book wasn't considered suitable for the "open stacks", but instead was stored with invaluable one-of-a-kind historical documents such as antique maps, a 15th Century Hebrew bible and 200-year old manuscripts by the likes of William Penn!  However, unlike these treasures, which couldn't be taken out of the library, I was able to do so with City of Night - but for just three days (and I was required to fill out a release form).

At the time I didn't question it as I was just happy to take the damn book out.  But that's when I came to the realization that college wasn't necessarily the bastion of liberalism and free thinking I always assumed.  Nestled in central Pennsylvania, University Park was insulated from the "real world" (I guess why that's why it's called Happy Valley) - and this incident really drove home that point.  35 years later I hope Rechy's book (and many others like it) has found its way to the "open stacks"

Time - is a mirage, it is reduced in moments of happiness and suffering in the hours stretched.