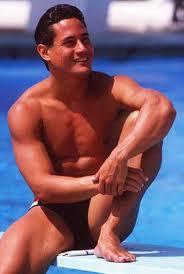 In 1995 diving legend Greg Louganis' autobiography Breaking the Surface was published and it became a best seller.  In it he discussed how he developed into a champion diver; his torturous coming out process; and his revelation about being HIV+.  Two years later the book was made into a TV movie that aired on March 26, 1997 on cable's USA Network.  Starring 23-year old cutie pie Mario Lopez (far right), his portrayal was somewhat wooden - but this was easily forgiven, or not even noticed, because of the many scenes where he wore a Speedo!

After Breaking the Surface Lopez had a number of other roles that brought further attention to his physique, e.g. on Nip/Tuck - featuring a classic shower scene (left); on Broadway in A Chorus Line - a story made the rounds that he was furious that fellow actor Nick Adams also got to show off his hot body; and as a contestant on Dancing With the Stars - where he and his dance partner finished second.  He's now a correspondent for the entertainment show Extra, which doesn't give him any opportunities to strip down or shake his hips.  Interestingly, according to his Wikipedia entry Lopez is a conservative Republican who attends church every week.