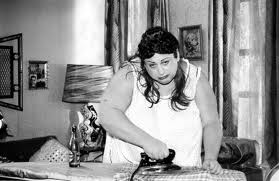 Just one week after I saw Divine in the John Waters movie Hairspray (believe it or not, it was the first John Waters/Divine movie I'd ever seen), she died from heart failure on March 7, 1988.  The actor who portrayed her, Harris Glenn Milstead, was just 42.  Besides movies, Divine also did live theater (Women Behind Bars), had a stage act and put a number of songs on the dance charts (e.g. So You Think You're a Man).  At the time of his death Milstead was in LA where he'd just been cast (as a man) in the new Fox TV network's sitcom Married with Children.

And although I didn't see any of Divine's earlier movies I felt like I had because my friend Tom was so good at describing classic scenes from 1972's Pink Flamingos, 1974's Female Trouble and 1985's Lust in the Dust (e.g., shoplifting meat under her dress; a Christmas meltdown after not getting cha-cha heels; seducing her son).

By contrast, compared to the outrageous earlier films (that brought her a cult-like following in gay circles), Hairspray was like Ozzie & Harriet (1981's Polyester was Waters' first attempt at broadening her, and his, appeal).  As Edna Turnblad, a depressed and overweight Baltimore hausfrau, some of Divine's best lines included:

Here's a clip of a TV appearance with Milstead as himself just a few months before his death.  It's interesting how subdued the audience was - perhaps they weren't sure what to make of Divine as a man. 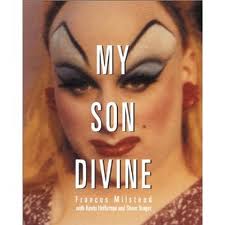 And believe it or not, Divine had a mother.  Her name was Frances, and after his death she penned a loving tribute to him titled My Son Divine.  Frances outlived her son by twenty-one years, dying in 2009 at the age of 89.