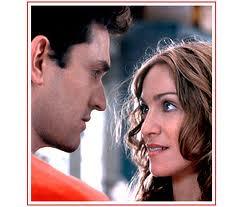 When it comes to movies, Madonna has had her share of hits and misses.  For every Desperately Seeking Susan or A League of Their Own, there was a Shanghai Surprise or Who's That Girl.  Rupert Everett, on the other hand, appeared in a string of well-regarded films, including The Madness of King George; The Importance of Being Earnest; and An Ideal Husband.  And his best known role was as Julia Robert's gay best friend in 1997's My Best Friend's Wedding.  Many thought he deserved an Oscar nomination for his supporting role in that film but he was overlooked.  However, Everett's luck ran out when he co-starred with Madonna in The Next Best Thing. 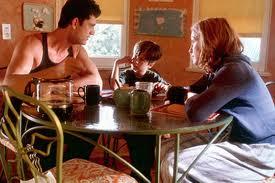 The Next Best Thing, which opened in theaters on March 3, 2000.  In it Everett once again played a gay best friend, this time his name was Robert.  Robert and Madonna's character, Abby, have a baby together which they raise under the same roof.  However, when Madonna falls in love with a straight man (played by sexy Benjamin Bratt) she plans to marry him and take the child she had with Robert.  This results in an ugly custody case in which it's revealed that Robert (are you sitting?) wasn't the biological father after all

So, how bad was the movie?  Madonna won a Razzie Award for Worst Actress (to sit next to her Golden Globe for Evita which she won three years earlier).  On a side note, there were a number of scenes in which Bratt's character was shirtless, revealing a number of peculiar raised scars on his nicely worked pecs.  There was speculation that these were tertiary nipples; others suggested they were the result of some sort of Native American piercing ritual (Bratt's mother is a Quecha Indian from Peru).  Bratt, however, declined comment.

This was the last film directed by openly gay, Oscar-winning director John Schlesinger (Midnight Cowboy).  It was said that difficulties he had with Madonna during filming contributed to a stroke he sufferrd after the film wrapped, which he never fully recovered from (he died in 2003).  However, in an interview in the Advocate Everett chivalrously took the blame, admitting that he pushed the 73-year old Schlesinger too hard in an effort to have the movie made the way Everett envisioned.

The movie's soundtrack CD has two songs by Madonna, an odd remake of American Pie (with Everett contributing background vocals) and the original ballad Time Stood Still.  Artists such as Moby, Groove Armada and Christina Aguilera also contributed songs.  The CD is better than the movie.