AIDS claimed Robert Mapplethorpe  in March 1989 when he was just 42 years old.  He became famous for his striking black and white photographs, many explicitly homoerotic with an S&M edge.  Whenever I hear or read Mapplethorpe's name three things come to mind: Patti Smith, the photograph "Man in Polyester Suit" and Cincinnati, Ohio. 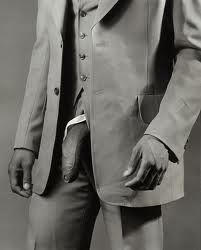 Although many books about Mapplethorpe have been published, the documentary Black White + Gray reveals the life he had with his partner Sam Wagstaff, whose financial support and social connections were instrumental in boosting Mapplethorpe's career.