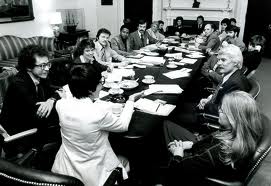 In April 1965 gay protesters picketed in front of the White House for the first time.  Twelve years later on March 26, 1977 more history was made when a group of fourteen community leaders was invited to meet inside the White House for the first time.  At this meeting they aired their grievances over various forms of discrimination practiced by the federal government.  The group met with the director of President Carter's Office of Public Liaison.

At the same time other gay issues were also gaining national attention thanks to Harvey Milk's election to San Francisco's board of supervisors; Anita Bryant's spearheading of an anti-gay ballot initiative in Florida; and actor Billy Crystal's portrayal as TV's first recurring gay character on ABC's sitcom Soap.

Then in June 1995 the Clinton administration created the post of White House liaison to the gay and lesbian community.  Two years later Bill Clinton became the first president to speak before a gay & lesbian organization when he delivered the keynote address at the Human Rights Campaign Dinner.

And in 2011 the White House named Jeremy Bernard as the first openly gay Social Secretary for the White House.  Presently, there are more than 150 openly gay and lesbian staffers working in the Obama administration, one third of whom are in senior/director level positions. 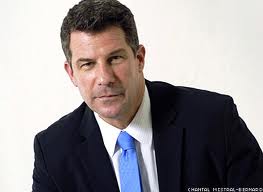