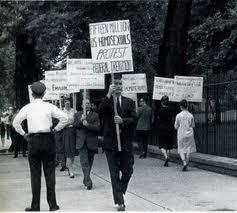 On the afternoon of April 17, 1965 a small group of dedicated and brave gay men and lesbians demonstrated in front of the White House for the first time to protest the unjust treatment of homosexuals by the federal government.  The demonstrators were from the DC branch of the gay rights group called the Mattachine Society.  They held picket signs with slogans such as "First Class Citizenship for Homosexuals" and "Homosexuals Are U.S. Citizens Too".   There was a debate among the participants on how to dress and it was decided that suits and ties for men and blouses, skirts and heels for women were most appropriate in order to show onlookers that homosexuals looked just like everyone else.  (The demonstration was depicted in the 1995 movie Stonewall.)

What a debt of gratitude we owe these brave, pioneering individuals who went out in broad daylight not knowing what kind of recepetion they might encounter. (It turns out they were largely ignored.)  Today equally brave LGBT ndividuals are taking their lives in their hands in openly hostile countries such as Uganda, Russia and Jamaica - as well as in "red" states like Oklahoma and Kansas.

A complete report on this demonstration can be found on the website of the Rainbow History Project.

There are LGBT people who opspoe gay marriage. If Stonewall set out to promote the the opinions of all LGBT people they'd soon find they had set themselves an impossible task. There are many different strands to LGBT equality and each individual LGBT person puts a different priority on each of them. If stonewall are content to pick up _any_ of these strands and further them then I value their work. Energy can be directed at attacking the establishments and individuals making concerted efforts to ensure no strands are picked up at all. To see this energy direced at attacking an organsiation helping further equalty strands, and not at those directly opposing them, makes me rather sad.