First Tony Awards Handed Out (April 6, 1947)
Coming Out With the Help of the Village People 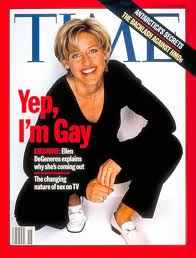 In preparation for the April 30 episode of her eponymous ABC sitcom in which her character was outed, Ellen DeGeneres herself "came out" in the pages of the April 14, 1997 issue of TIME Magazine (which hit newsstands on 4/7).  And what a lovely cover it was.  (14 years later, in ads for Cover Girl, Ellen looked as fresh as she did in 1997, thanks to the marvels of retouching).  Although TIME had a famous cover story in 1975 titled "I Am a Homosexual", in which Sgt. Leonard Matlovich talked openly about his homosexuality, the Ellen cover story was the first time an entertainer had come out in such a public fashion.

After this story ran it seemed for a while that DeGeneres and her partner, actress Anne Heche, were turning up everywhere, supplanting Harvey Fierstein as the media's favorite token gays.  Then a year after TIME's cover story Entertainment Weekly ran one titled "Yep, She's Too Gay".  It reported on the backlash against Ellen's sitcom and its gay storylines.  And in 2000 Ellen and Anne ended their relationship. 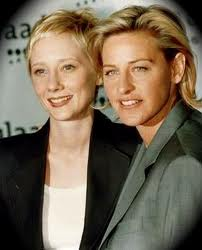 Ellen's career foundered a bit after that, but then she made a triumphant return as host of the Emmy's a few weeks after 9-11.  And six years later she hosted the Academy Awards (and a second time in 2014).  She was also the voice of the blue fish, Dory, in the high-grossing animated movie Finding Nemo.  Besides being a spokesperson for Cover Girl she also appeared in ads for American Express.  And her success extended to publishing as she wrote five books during the decade, including the best seller Love, Ellen: A Mother/Daughter Love Story.  Then another career hiccup occurred two years ago when she was a judge on American Idol and found herself uncomfortable dishing out criticism. 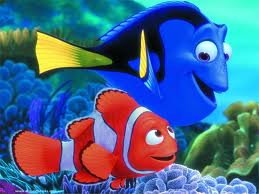 Since 2003 DeGeneres has had her own Daytime talk show and there was even speculation about her replacing Oprah when O retired - although Ellen's audience was a fraction of Oprah's, and her show's content much lighter.  (FYI, Ellen came out to Oprah on her show the month before TIME's cover story). 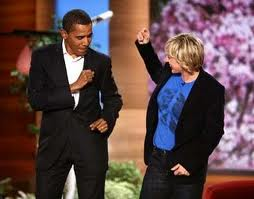