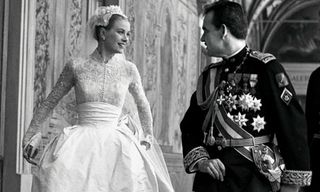 Twenty-five years before the wedding of Charles and Diana another fairytale wedding had the world aflutter as 26-year-old Oscar-winning movie actress Grace Kelly married 32-year-old Prince Rainier III of Monaco.  (Three months after their nuptials the last of her eleven movies, High Society, was released.)

Unlike Diana's tumultuous life, Princess Grace's with Prince Rainier was seemingly a happier one.  However, like Diana, Princess Grace died young (age 52) in a car accident - but under different circumstances.  Princess Grace was behind the wheel when she suffered a stroke and the car plunged down an embankment.  Her death came a year after Diana's marriage and Princess Diana represented England at the funeral.