Coming Out With the Help of the Village People
Demonstration for Gay Rights Held at White House for First Time (April 17, 1965)

Two years after the first puzzling cases of failing immune systems were reported among gay men in San Francisco, Los Angeles and New York, Newsweek ran a cover story (cover date of April 18, 1983) about the spreading plague titled "Epidemic: The Mysterious and Deadly Disease Called AIDS May Be The Public Health Threat of the Century.  How Did It Start?  Can It Be Stopped?" 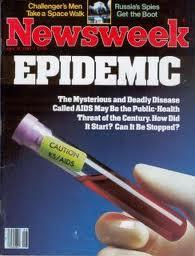 The article reported that although the ravages of AIDS on the body were well documented, medical researchers had yet to determine how the infectious agent was introduced into the body.  As long as this mystery remained unsolved it would be impossible to arrive at a medical solution.  And until that time arrived AIDS would largely continue to be a death sentence for those who were infected.  Here is the story's opening paragraph:

Since it came into public view in 1981, derisively called "The Gay Plague," AIDS (Acquired Immune Deficiency Syndrome), which ravages the body's immune system, has stricken 1,300 Americans - more than half of them in the last year. And there is no cure in sight. "In my professional career, I have never encountered a more frustrating and depressing situation," says Dr. Peter Mansell of Houston's M.D. Anderson Hospital and Tumor Institute. "People who you know are likely to die ask what they can do to help themselves, and you are forced to say, more or less, 'I have no idea'." (To read the full story click here.)

Since many of those who were already infected during these early years were unaware of their status they could unknowingly infect others.  Additionally, wild misconceptions about the disease were running rampant.  As a result, there was unsettling speculation over whether the federal government might (or should) take drastic measures, such as a quarantine of gay men, to prevent the illness from spreading to the general population.  (An action that was taken by Cuba.)

A few months later TIME Magazine ran a cover story with the subhead "AIDS Panic" and later that summer Newsweek ran another cover story about AIDS, this time showing two gay men as a way to give the story a human dimension.