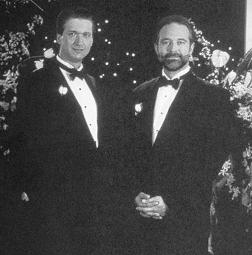 The quirky show Northern Exposure was a one-hour "dramedy" that aired on CBS on Monday night.  It told the adventures of a doctor (played by Rob Morrow) transplanted from NYC to the live-and-let-live town of Cicely, Alaska (whose founders were two lesbians).  It aired for six seasons, and in Season 4 it aired an episode on May 2, 1994 in which innkeepers Ron and Erick were married.  As pioneering as the storyline was, this was the second same-sex wedding in primetime history - Fox's sitcom Roc had the first in the fall of 1991.

Since that time there have been a number of other gay marriages on network TV, among them:

But the "Northern Exposure" episode titled "I Feel the Earth Move" was the first gay wedding in an Emmy Award winning drama series. It was blacked out in several southern states including Jeff Session's Alabama. The episode was boycotted by the Catholic Church who advised all "good" Catholics not to watch. It's one of our favorite episodes because it looks on gay marriage as a natural expression of love for one another. Barry Corbin who plays the ex-astronaut, richest man in town and a "Republican to the core" makes up an excuse not to be in town for Ron and Erick's wedding. What happens next is heart warming and funny. We've come along way in 23 years. Not going to let the "Trumpites" take it away from us. Art and I will celebrate our 3rd wedding anniversary in May. Together 18 years this Easter season.