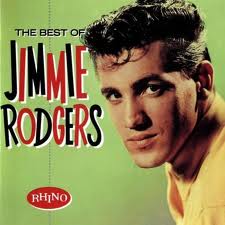 We've probably all seen the TV infomercials for Time-Life Records' various music compilations, e.g. "Love Songs", "Groovy 60s", "Mellow Moods", etc.  I've bought a number of them, and am glad I did, because they introduced me to some great songs.  One in particular was Secretly by Jimmie Rodgers.  It entered Billboard's Top 40 today in 1958 and became a #3 hit.  (Rodgers is best known for the song Honeycomb which topped the charts for four weeks the year before.)  It's a pleasant tune, typical of so many songs from this vanilla decade, but what got my attention was its gender-neutral lyrics.  In my interpretation, the song tells the story of two men who, due to the mores of the 1950s, must conduct their romance "secretly".  Here's the chorus:

"Wish we didn't have to meet, secretly

Wish we didn't have to kiss, secretly

'Til we have the right to meet openly

'Til we have the right to kiss openly

We'll just have to be content to be in love secretly." 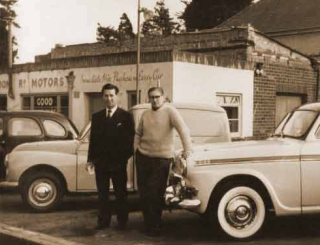 Of course, these lyrics could also apply to a West Side Story situation between a boy and girl of different races or ethnicities.  Still, I thought the hidden message was a bit daring for the conformist 1950s.  (Reminds me of the secret delight I got when I first listened to the Village People's innuendo laden songs.)  I'm curious whether the song was popular with homosexuals at the time.

Of course, there have been other gender neutral songs such as Secret Love by Doris Day, and the Beatles' Do You Want to Know a Secret?, but their lyrics don't have an air of illicitness to them.  One that does, however, is the disco classic by Madleen Kane, Forbidden Love, from 1979.  In the song's opening line, Kane sings, "How can you stop a trembling hand, reaching for another hand, even though it is forbidden love?"

Here's a wonderful video/photo montage from a website called "GayTwoGether" that has been set to the very song discussed here:

I just heard this song for the first time on YouTube, and found your site via Google while searching for the meaning to the song. I had similar thoughts that this song might be about a gay relationship, but judging by the time period and that it's an American song, it could just as easily be about an inter-racial relationship too. Either way, it's a beautiful song, with a powerful, though ambiguous, message.

I loved the song, bc my boyfriend and I gave to hide our love, simply bc my parents don't like him. Although, I also got that vibe. Listening to the song, and studying the lyrics, and then reading your blog, I decided to dig a little deeper. Now, I agree, it was the US, in the 50's, I doubt it's about homosexuality, but it's possible, and Jimmie Rodgers, was not gay. He had three different wives. Unless they were coverups, but, again, it was the US, in the 50's. But I agree, it's amazing and the lyrics spoke to me

Hi Katie-Lyn, thank you for your comment. I'm glad you enjoyed the post. Although the song likely resonated with heterosexual as well as homosexual listeners, Jimmie Rodgers may very well have been oblivious to the gay connection; however, I have a feeling the songwriters were aware of the double meaning - who knows, perhaps they were even gay? Regardless, it's a sweet song.

I have always loved this song and was thrilled when I was able to give him a hug after a performance I went to at the Pfister hotel in the early 70's.....He is still so dreamy...I think it was simply a song about 2 young teenagers in live and they met secretly to fool around... (hot stuff!)

I always thought he was singing about an underage girl: so many of the pop/rock songs of the era were about teen love. He's looking forward to when she's old enough they no longer need to meet in secret.

I have often thought this song was ababout a gay relationship, or perhaps a mixed race relationship.

I’ve heard Secretly hundreds of times. (I’m 73). Today I heard it and it was like a gong went off in my head. I thought it must be about a gay couple, which definitely would have been forbidden back then. I guess it could be about any “taboo” relationship. It odd that I never thought of this meaning before today.