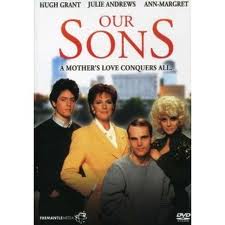 In 1985, in the early years of the AIDS crisis, the TV movie An Early Frost aired.  Six years later, with AIDS-related deaths numbering over 100,000, and climbing steadily, another AIDS drama, Our Sons, aired on ABC.  (Both movies were directed by John Erman.)  Starring Julie Andrews, Ann-Margret and Hugh Grant, Our Sons tells the story not only of how AIDS impacted families, but how mothers dealt with their children being gay.  The movie happened to air the same day as GMHC's annual AIDS Walk in New York.

Andrews portrays Audrey Grant, a buttoned up businesswoman from Southern California.  At the behest of her son (Hugh Grant) she travels to Arkansas to deliver the news to Ann-Margret's white-trash character, Luanne Barnes, that her estranged son is dying of AIDS.  (Despite both being British, Hugh Grant had an American accent but not Julie.)

Audrey has a strained reltaionship with her son while Luanne wants nothing to do with hers.  Their vastly different backgrounds leads the mothers to clash, eventually driving Audrey to scream at uncaring Luanne, in Dynasty-like fashion - "He's dying, you bitch!"  Ultimately, there was resolution as Audrey and Luanne bonded over shared feelings about coming to terms with their sons' homosexuality.

Although I wouldn't call the ending "happy", Luanne went to California and was with her son when he died and had him buried in Arkansas.  As often happens, movies from different eras seem quaint and outdated when viewed in the present, as is the case with this movie.  Nonetheless it was a brave undertaking at that time considering the dearth of open discussion about AIDS.