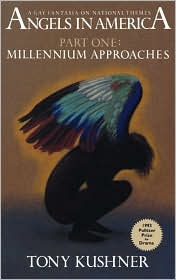 On May 4, 1993 Angels in America: Millennium Approaches opened on Broadway to wide acclaim.  A sweeping tale about the AIDS crisis, the drama had an array of compelling characters who were eccentric, despicable and tragic (it also had a couple of frightening angels), all who came together to create a thought-provoking, emotionally wrenching and thrilling theater experience.   A month after opening it won the Tony for Best Play.  It also won a Pulitzer Prize for playwright Tony Kushner.  The following year Angels in America Part 2: Perestroika opened and it also won the Tony for Best Play.  Then in 2003 a much lauded TV production (encompassing Parts 1 and 2) aired on HBO starring Al Pacino, Meryl Streep and Emma Thompson.

An especially interesting character in the play wasn't fictional - New York attorney Roy Cohn.  He was notorious for participating in the McCarthy hearings of the 1950s when he helped weed out alleged Communist sympathizers and homosexuals from the federal government.  Yet Cohn himself was a closeted gay man.  After being diagnosed with AIDS, he vehemently denied having it.  But eight years after his death, Kushner gave him a prominent role so all could see what a contemptible, self-loathing individual he was. 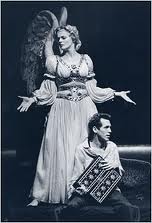 Although Angels in America was set in the mid-80s when nothing but hopelessness came with an AIDS diagnosis, by 1993 hope had arrived with the arrival of a class of drugs known as protease inhibitors.  They largely turned AIDS/HIV into a manageable condition for many.  (And 20 years later the drug Truvada was approved as a pre-exposure prophylaxis (more popularly known as PrEP) for those who are negative.