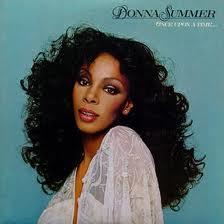 Disco queen Donna Summer died on May 17, 2012, joining other beloved performers such as Sylvester and Loleatta Holloway on the great dance floor in the sky.  She was 63.   Simply put, Donna Summer = Disco.  My coming out in the late 1970s coincided with her ascent to superstardom.  Her double-LP Once Upon a Time (pictured, right) was the first disco album I owned, bought during the summer of 1977.  I remember watching her TV special in November 1979 that coincided with the release of the double-LP Live and More, which featured MacArthur Park.  (Every time I've gone to the Monster on Tuesday's Classic Disco night they always play the entire 17-minute MacArthur Park Suite.)

Interestingly, Summer won a Grammy in the Rock category in 1980 for Hot Stuff and received two other nominations in the category in 1982 and 1983.  And on the same LP that had the Rock song Protection on it she also had a Gospel song titled I Believe in Jesus, which I actually liked.  Besides these types of songs and her disco smashes she also had quite a few beautiful songs with slower tempos.

Even after her popularity began to wane in the mid-80s (partially due to a backlash caused after she made anti-gay statements) I enjoyed these later albums and their treasure trove of tuneful songs that were overlooked by many.  In the summer of 1999 I saw her in concert at Jones Beach on a Friday night before heading out to my Fire Island share for the weekend.  It was when she had a comeback hit with I Will Go With You (Con te Partiro).

With 100 of Donna's songs on my iPod, it was quite a challenge for me to narrow them down, but here are my most favorite, most which weren't big hits:

Donna also sang a beautiful version of the holiday classic The Christmas Song.