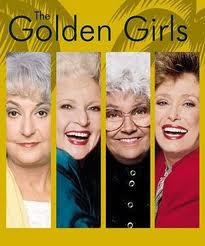 The NBC sitcom The Golden Girls aired for seven seasons and tonight's episode on May 9, 1992 was its last.  In it, Dorothy (Bea Arthur) got married and moved to Georgia.  That spring NBC bid farewell not only to The Golden Girls but also to the Bill Cosby Show and to the Tonight Show's Johnny Carson.  GG developed a gay following because gay men could relate to the witty/bitchy repartee of Dorothy, Blanche and Rose.  It was not unlike what you'd hear among a group of gay men sharing a summer house at Fire Island - with everyone vying for the role of slutty Blanche!  (Six years later gay men would clutch to their bosoms another show about four women friends, HBO's Sex & the City.) 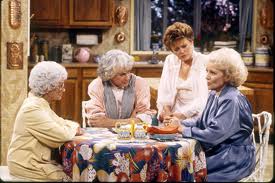 Although I liked the show, I only watched it sporadically because it aired on Saturday evening - not the most convenient time for a guy in his 20 and 30s to be sitting down to watch TV - whether he was gay or straight.  (Many gay bars aired it on Saturday night.)  I may have watched more episodes when it aired on the Lifetime cable network from the late 90s thru much of the next decade where it aired multiple times daily.  After 12 years on Lifetime it was acquired by the Hallmark Channel, then WE TV and most recently to LOGO.

Betty White is the only one of the four actresses still with us.  Rue McClanahan died in 2010; Bea Arthur in 2009 and Estelle Getty in 2008.  White, still going strong, celebrated her 93rd birthday in January.