The Swift Downfall of Oscar Wilde (May 25, 1895)
Favorite Songs About New York - From a Gay Perspective 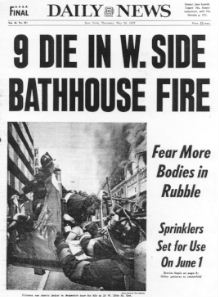 "Son of Sam", and the July blackout are the two news stories most New Yorkers remember from 1977, but another tragedy that same year is overlooked - the fire at the Everard Baths.  (In fact, while doing research for this post, a Wikipedia article I reviewed about disasters in New York didn't include the Everard fire - so I added it.)   Although it wasn't on the scale of the fires at the Triangle Shirtwaist Co. in 1911, or the Happyland Social Club in 1990, it was still one of the City's deadliest.  Because it was a bathhouse, families of the nine who died and those injured were no doubt concerned about having their names revealed.  One of those who died was 32-year-old Jimmy Stuard, a well known DJ at the club 12 West. 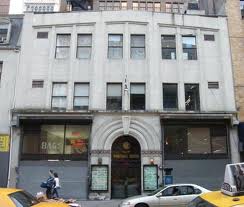 The Everard was on West 28th St., just off 5th Ave. and had been a bathhouse for decades.  It's even mentioned in Andrew Holleran's classic gay novel Dancer from the Dance , which was published the year following the fire.  After it reopened, it remained in business through the mid-80s, when it was closed as part of the City's response to the AIDS crisis.

I went to the baths during my first year in New York (1979-1980), and I visited the Everard once in March 1980 (which had relocated a few blocks away).  I also visited a number of other bathhouses once, including Man's Country, the St. Mark's Baths and the Big Apple, because I favored the Club Baths.  (However, once I began dating someone steadily in the fall of 1980 my adventures at the baths ended.)

Thank you for writing/blogging about the Everard Bathhouse fire. One of the 9
who died in that fire was my Dad's younger brother, my Uncle Ira. All I know
about the fire I've read only recently online. I was 7 years old when he died. It killed my grandmother's soul ... how could it not. Anyways, thank you for writing about it. My uncle was a really great guy!

I'm doing some research on the victims of the Everard fire and I would love to talk to you about your Uncle Ira. My e-mail is danceranthonymalone[at]yahoo.com. I hope to hear from you. Thanks!

Jessica and Rob, My name is Ed I am writing a play about the Everard please contact me I would like to know more about Uncle Ira. With Respect. Ed
stagedaddie@yahoo.com