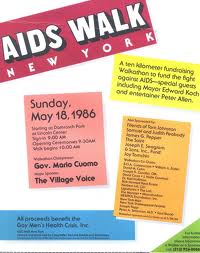 The weather couldn't have been nicer for GMHC's first AIDS Walk in 1986; skies were sunny and the temperature was around 80°.  Six thousand walkers signed up, and raised $710,000.  During its first five years, the event took place in and around the Upper West Side's Lincoln Center neighborhood.  However, when the number of participants passed 20,000 it became a Central Park event. 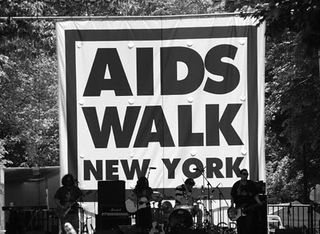 Celebrities such as Joan Rivers, Susan Sarandon, Jon Stewart, Whoopi Goldberg, Phil Donahue and Marlo Thomas, Roseanne and Kenneth Cole, and many others, have participated and given inspiring speeches about the importance of the cause.

Beginning with the nation's first AIDS Walk in Los Angeles in the summer of 1985, there are now more than 125 AIDS Walks held across the nation every year - in nearly every state and Washington, DC.  Additionally, AIDS Rides have become another popular fundraiser for those who like to expend a lot more energy.

Here is a wonderful video produced to commemorate the 25th AIDS Walk in 2010: