Always one to push the envelope, Madonna was able to cross off "perform on Broadway" from her bucket list on May 3, 1988 when she co-starred with Joe Mantegna and Ron Silver (who won a Tony for Best Actor) in David Mamet's play, Speed-the-Plow.  It was an early example of a show hiring a popular non-actor to draw an audience.  Plow ran thru New Year's Eve.   Madonna played the role of Karen, a temp in a Hollywood studio who turned out to be a smooth operator.  At the time of this acting stint she was in between albums, 1986's True Blue and 1989's Like a Prayer.  I saw the play six weeks after it opened, on June 14, with a fellow I dated briefly.  We had great seats, sixth row center, and were surrounded by other excited teen girls and gay men waiting to see their idol.  Madge's performance was uninspiring, and in my journal I wrote: "It was a wooden performance, her delivery seemed unnatural and it seemed as if she was reading for an audition".  Still, it was fun to see her close up.  And props to Madonna for going beyond her comfort zone of music videos. 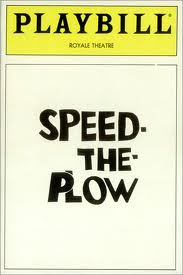 20 years later the play was revived with Jeremy Piven, Raul Esparza and Elizabeth Moss (Peggy from Mad Men).  The revival made headlines a few months after it opened when Piven dropped out after claiming he was suffering from mercury poisoning caused by eating nothing but sushi for years.  He turned out to be more high-maintenance than Madonna! 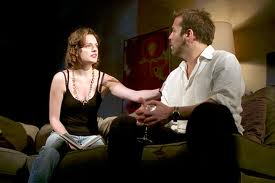