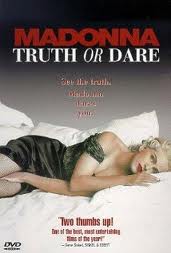 The documentary Truth or Dare followed Madonna on her "Blond Ambition" concert tour as she played Japan, Canada, the U.S. and Europe.  It was shot during her dalliance with Warren Beatty (who she starred with in the 1990 movie Dick Tracy).  Others who appeared in the doc included gal pal Sandra Bernhard and Antonio Banderas (who co-starred with Madonna in the movie version of Evita six years later).  It opened in New York and L.A. the weekend of May 10-12, 1991. 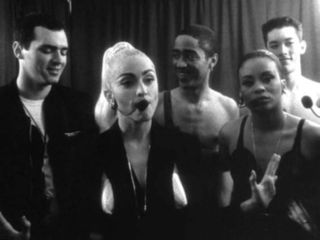 Memorable scenes included Madonna felating a bottle while playing "Truth or Dare" with her back-up dancers; dissing Kevin Costner when he came backstage and referred to her concert as "neat"; and lying next to the grave of her mother in Michigan.

For whatever reason, one piece of dialogue from the movie sticks with me.  While relaxing in her hotel room in Madrid, Madonna is joined by Sandra Bernhard and at one point the talk turns to sleeping with people they hate.  Bernhard posits that sex is always hot when you can't stand the person.

To promote the movie Madonna made a cameo on the May 11 episode of Saturday Night Live where she appeared in a dream sequence during a "Wayne's World" skit.

The following year Showtime aired comedian Julie Brown's delicious parody of Truth or Dare titled Medusa: Dare to be Truthful.  One of the characters in this mockumentary was Kathy Griffin.

Truth or Dare did very well for a documentary film and still ranks among the 10 highest grossing docs of all time.  Its $29 million box office take is comparable to about $55 million in today's dollars.